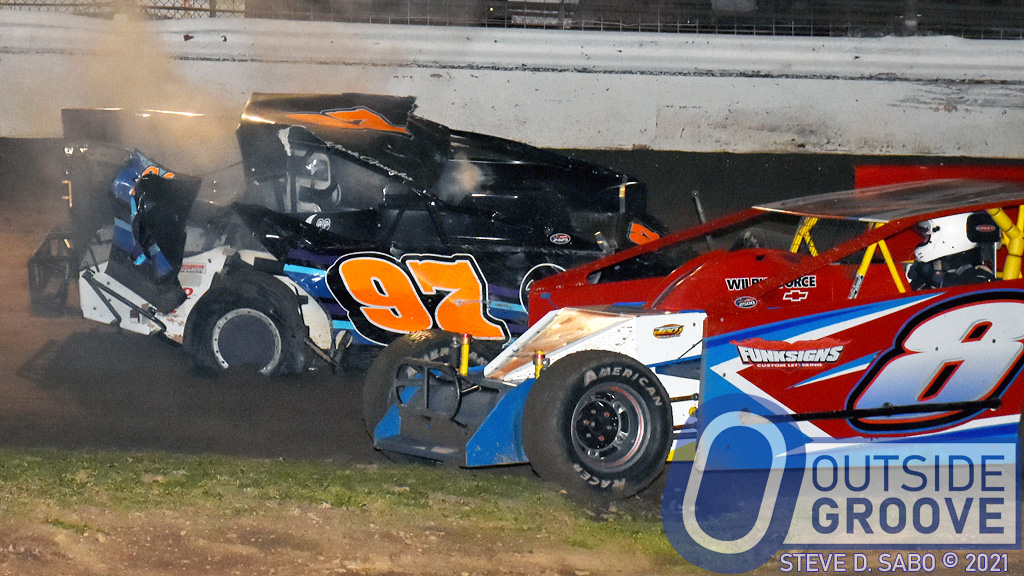 The sportsman of Mark Gaugler came to rest after a violent flip, with Brad Force (8) eking by. The incident occurred during a consolation race at Grandview Speedway in Bechtelsville, Pennsylvania.

“It was a restart, and as we got up to speed in turn four, the car on my inside came across the track in front of me,” said Gaugler, of Boyertown, Pennsylvania. “I hit that car on the side as we went up against the guardrail. My car then went end-over-end and barrel-rolled.”

Gaugler sat in a Kirkey full-containment seat, with a Simpson five-point harness. He wore a Bell helmet, but no head-and-neck restraint.

His 2014 modified from Bicknell Racing Products received quite a bit of damage. The accident bent the chassis and wrecked all four corners’ suspension components and the entire body. Luckily, Gaugler had a spare 2008 Bicknell chassis that he can use at the next event he competes in.

Gaugler entered the cockpit of a race car at age 50 last season. He took an interest in racing because of his future brother-in-law, driver Glenn Fitzcharles, an inductee in the National Sprint Car Hall of Fame.

“I always wanted to drive, but we decided to start a family,” said Gaugler. “That was 34 years ago. Last year, the time seemed right to start driving.”

Mark Gaugler plans to race regularly at a pair of Pennsylvania ovals: Big Diamond Speedway in Pottsville and Grandview Speedway.

“Dawn is a little upset,” Gaugler said. “She wants me to take this weekend off so I am fully recovered from the soreness in my ribs and back. She’s usually right, so I’ll probably honor her wishes.”