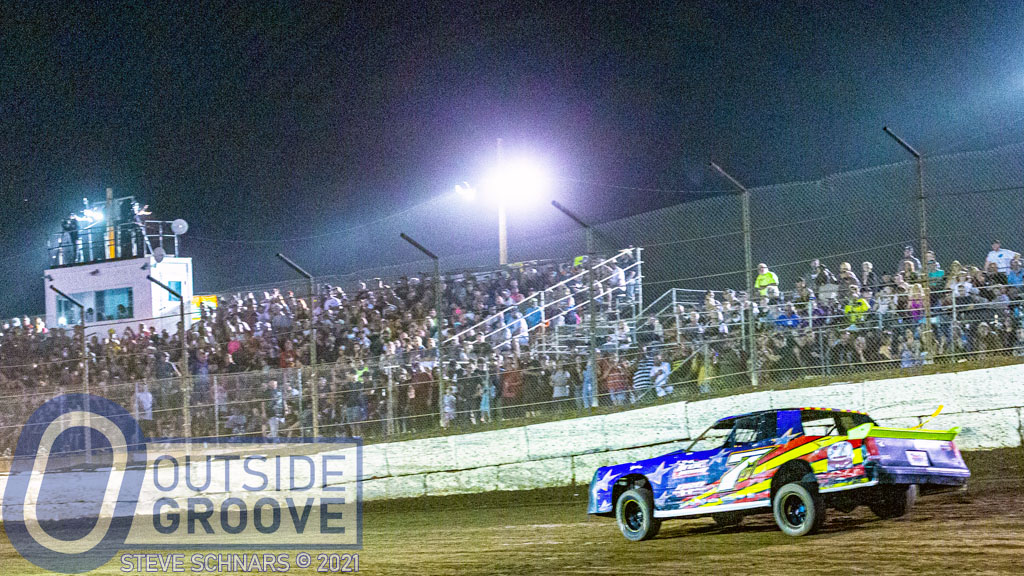 This won’t be the last time you see a race car (in this case, the stock car driven by Anthony Madrid, of Phoenix) run at Arizona Speedway in Queen Creek. After outcry from the racing community and widespread compassion for promoter Jonah Trussel, Arizona State Land Department commissioner Lisa Atkins granted an extension of the special land use permit used by Arizona Speedway. (See “Arizona Speedway: Set to Close in April”.)

Trussel made the surprise announcement in front of a packed grandstand. It occurred at what was to be the speedway’s last program, dubbed “The Last Dance.”

“At 6:30 p.m., I was on the rototiller and my attorney called,” Trussel told the crowd (see full announcement on YouTube). “He said an agreement had been reached with the department to [let us] race until November 30.”

A roar from the audience followed.

Commissioner Atkins said she made her decision after hearing more information about the speedway’s operation.

“[The decision to extend the permit came] after consideration of the time and resources many race participants had already invested in [upcoming] events they expected to occur through the year,” said Atkins. “I am pleased to be able to work with Jonah Trussel and the racing community to complete this year’s season.”

Trussel credited drivers Bryan Ledbetter Sr. and Josh Shipley with spearheading a campaign to inform the Arizona State Land Department about the speedway. He also said 3,000 fans signed a petition to keep the facility alive.

“We needed them to know that we are not a bunch of hillbillies driving our cars around, out in the desert,” Trussel said in his announcement. “Racing is a family, and all the support we received was great and felt good.”

Trussel already sold many items at the track in anticipation of closing. Now, he needs to shift gears. Arizona Speedway hosts its next race Saturday, April 17.

“We will rework the schedule a bit — the big shows will stay,” said Trussel.

Trussel indicated there would be hope for dirt racing beyond the 2021 season — in another location.

“I’m positive there will be no extension past November 30,” Trussel said. “There are openings for race facilities in the East Valley [of metro Phoenix]. We’re in talks to go somewhere else.”