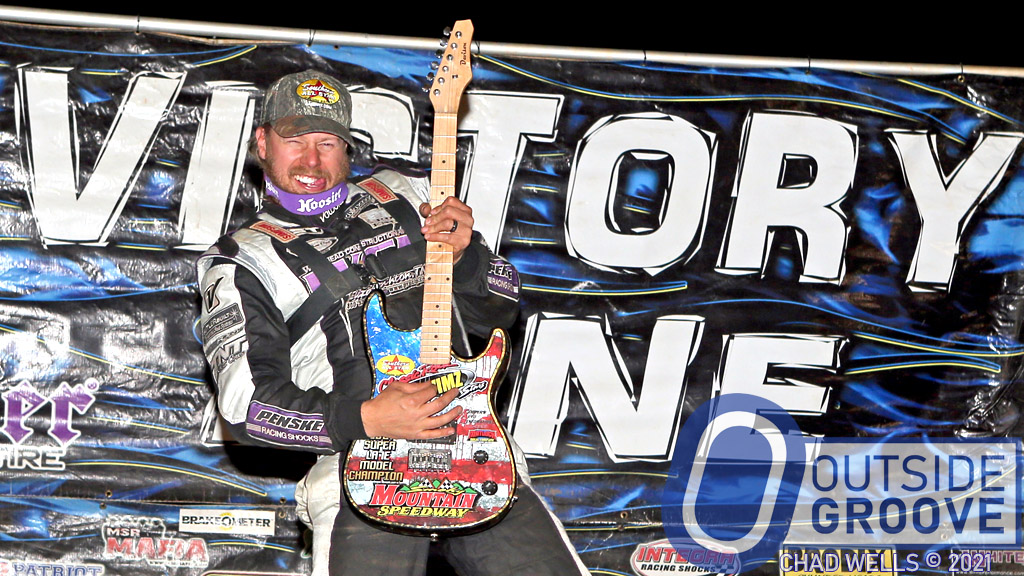 Jensen Ford, a man who earns a living rocking sheet metal while wearing a mullet, made his first trip to super late model victory lane last Saturday. His win netted him a guitar and $5,000 at the Southern All Star Racing Series’ “Rockin’ with the Stars” event hosted by Smoky Mountain Speedway in Maryville, Tennessee.

“It’s a relief off my shoulders,” said Ford, who was a successful crate late model racer before moving up to supers last year. “We’ve had speed, but we haven’t been able to put everything together. Finally, everything fell into place. It comes to a point where … you start thinking, ‘Can I really win one of these races?’ I know I can do it now.”

Hedgecock (see “Tops in the Topless (video)”) provided the impetus for Ford to grow his now-trademark hairdo.

“[The mullet] started as a bet between me and Cory,” Ford, 33, of Johnson City, Tennessee, said. “We made the bet for Boyd’s [Speedway in Ringgold, Georgia]. If you lost, you had to have a mullet. I ended up not being able to make that race. I lost because I didn’t show up.”

During the week Ford and his crew chief Wesley Laws build bodies and perform setup work on customers’ cars for WPR Fabrication, a business owned by their car owner, Mike Whitehead.

“What we do sheet-metal-wise just about pays for us to race — and that’s our goal,” said Ford. “We’re constantly doing sheet-metal work to keep our program [going].”

“[My father] got a bunch of cars out there [but] 90% of them are crates,” Ford said. “It makes it tough not having 200 other cars out there to try to figure out what you have to do [in super late model racing]. So, we have to do it ourselves. It’s a lot of work, a lot of studying, a lot of measuring, a lot of figuring, but I feel we’re getting there.”

In racing, results provide the ultimate measure of one’s success. Last weekend, Jensen Ford was the best of his field. This week, he’ll work just as hard to find his next win, but maybe he’ll rest a tad easier than before — but maybe not his family. The fan of rock groups AC/DC, Metallica, and Pantera now has a guitar to play with.

“My and my wife talked about going to get an amp,” said Ford. “I play a little guitar. I’m not very good at it, but maybe it’ll sound pretty cool.”