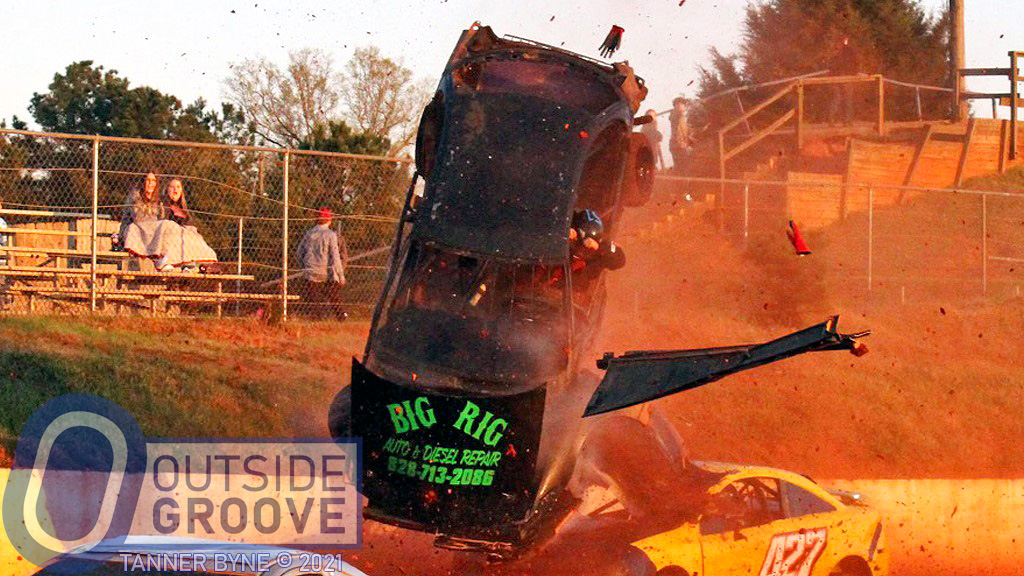 At the ½-mile Lancaster Motor Speedway in South Carolina, Charles Levister took the lead shortly after the green flag waved in his heat race for the extreme four class. Seconds later, his 1998 Saturn shot into a series of flips after Levister made contact with a car attempting to pass him. As he rolled in the air, Levister’s torso dangled out of the driver’s side window.

“I was awake the whole time,” Levister, of Carlisle, South Carolina, said. “I remember my shoulder and head being outside of the car as it was flipping. It was scary. I was lucky my body did not make contact with the ground.”

At the Seat of the Issue

Charles Levister had bought the race-ready car from another driver earlier this year.

“My seat broke loose, but my belts held me in,” said Levister. “The seat was mounted to the floorboard on the bottom, and to the roll cage on its back side. The bottom of the seat broke free but the back stayed hooked up.”

Levister sat in a traditional seat from Richardson Racing Products. However, no seat can do its job unless mounted properly.

“The devil is really in the details,” Kevin Derochie, of Kirkey Racing Fabrication, said. “You can buy the most expensive containment seat we offer, but it is only as safe as the mounting. You need to mount the seat securely to a roll cage. We recommend the bottom be mounted in four points, either straight through the bottom of the seat or though the side of the seat. The rear of the seat must be supported as well, with mounts that span the shoulder restraint to evenly distribute the load.”

“The crotch or sub belt is most important in a five-point harness,” said Fred Crow, of Crow Safety Gear. “It keeps the harness’ belts in place and keeps the harness from sliding up as it is tightened. A driver has to have a harness that is kept in place in order to be contained in his seat.”

“A neck collar only keeps the dirt off your neck,” Shaw said. “Racers should take advantage of new technology that is available and frontal head restraint systems that are reasonably priced.”

Shaw added that Levister could have added another item to help contain him.

“[Levister] had no window net,” said Shaw. “Window nets are inexpensive and easy to install. If installed properly, a net would have kept him in the car.”

Andrew Smith regularly wins big-money front-wheel-drive races in the SCDRA with cars he built. The driver who has experience in what is now called the ARCA Menards Series East advises racers to readily seek safety advice from trustworthy sources.

“As a racer, I would never turn away another racer with a safety question,” Smith, of Pooler, Georgia, said. “Don’t feel embarrassed about asking a question. Nine times out of 10, racers don’t have their seat belts mounted properly. I’m here to help.”

“After the crash I could hardly move my shoulder,” said Levister. “My knee, ribs, and neck were sore. My hands were cut all to crap because I didn’t have my gloves on.”

Charles Levister returned to work the Monday after the crash. He earns a living in construction, currently as a bridge builder on I-26 in the area of Columbia, South Carolina.

“I am fortunate that I could still work,” Levister said. “Like everyone else in racing, I have bills that need to be paid. I was lucky this time. I will make safety changes for sure.”

Those changes include a full-containment seat, a new helmet, and possibly a frontal head restraint system.

“I’m building a new Saturn SL2, with the same engine, and using the same roll cage,” Levister said. “I’ll upgrade the cage, adding a bottom bar to mount the seat, more bars above my head. I’ll make the roll cage higher, so it is away from my head.”