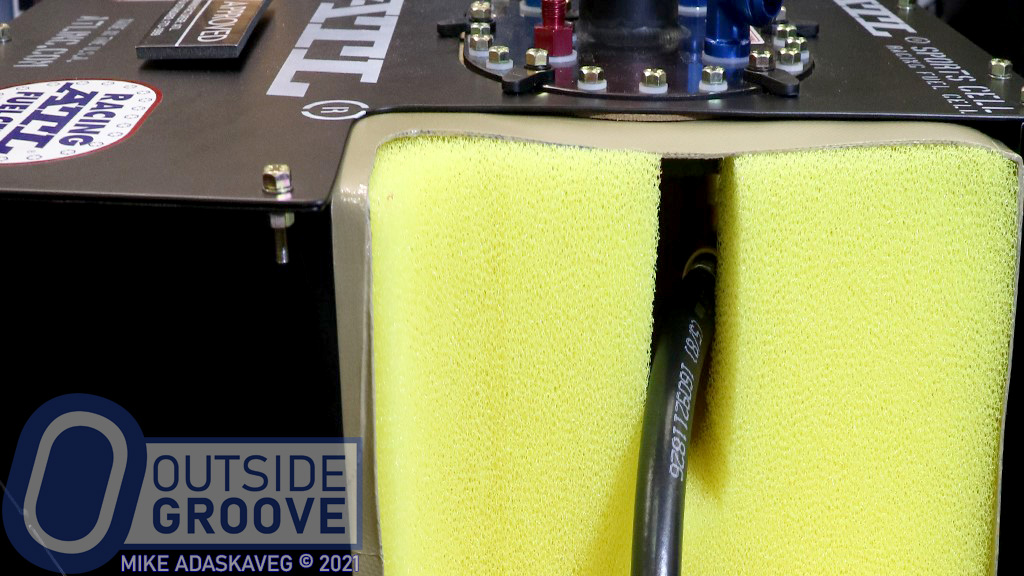 “We have had no experiences with foam deterioration clogging filters,” said Paul Culp, of Superior Fuel Cells. “We use a proprietary, mil-spec, 10-year foam made from the same material our fuel cell bladders are made from and we have had no issues with the bladders, either.”

“It’s the most popular question asked, but it doesn’t happen,” Dave Dack, of ATL, said. “Years ago, foam would break down from fuel additives. Way back in the 1970s, fuel had high aromatic content and harsh fuel additives were extremely popular. Today, we are not seeing premature aging from foam, not even from gasoline fuels with an ethanol content.”

The Purpose of Fuel Cell Foam

Manufacturers put foam in fuel cells to suppress the chance of an explosion.

“If the fuel cell bladder is breached, there can be ignition of the fuel,” Dack said. “The foam makes sure there is no concentrated batch of vapors. Because of the foam, a flame front can’t develop and travel through all the vapor so quickly that would reach explosive velocity. An explosion, after all, is just a very rapid rate of combustion.”

The foam offers other benefits. It gives the flexible bladder its shape. And, it prevents sloshing, which improves performance.

“All of our fuel cells are equipped with foam — we do that to protect the racer,” said Dack. “Racing with a cheap plastic tank or no foam in a tank is dangerous.”

Taking Care of Your Cell

As with any part on a race car, fuel cell foam requires regular attention.

“Fuel cell foam has a lifespan,” Freddie Turza, of VP Racing Fuels, said. “It needs to be inspected on a maintenance schedule.”

When inspecting the foam, carefully remove it from the bladder and place it on a clean surface. Avoid ripping the foam, since manufacturers, such as Superior Fuel Cells, cut the foam in a way that cauterizes the foam’s edges to prevent it from falling apart.

“Check your foam and check your filter,” said Culp, who also races a dirt modified and late model.  “I check my filter every three races. I look for particles that could simply come from dirt or fuel that was in a bad barrel or container.”

“Don’t poke a stick in your cell to measure fuel levels,” Culp said. “Racers have ripped foam doing so and have also damaged the bladder. Clean foreign material away from the filler when refueling. We’ve found lots of dirt and even metal shavings in customer’s cells.”

The fuel you use may affect the performance of your fuel cell’s foam.

“I ask racers to confer with me when making a fuel cell purchase,” said Dack. “The bladder and the foam used is a racer’s most critical decision in safety and performance.”

For example, ATL offers foam specific to the fuel used. ATL recommends its yellow SF-103 for gasoline up to 85% ethanol (such as E85) and its charcoal gray SF-110 for 100% alcohol.

In addition, Dack said racers should not use HVAC-type, air-filter foam in their fuel cells. This type of foam can turn into a goopy substance after exposure to race fuels.

Changing Fuels with the Same Cell

With fuel cells geared toward specific fuels, Turza discourages racers from switching types of fuel with the same cell.

“The changing of fuel back and forth can be a problem in isolated cases,” Turza said. “I stress that this is not a universal problem. Racers using the same fuel system and changing from gasoline to a semi-aggressive fuel [for example, ethanol] and back can cause a chemical reaction that accelerates deterioration of the fuel system. All ethanol-style fuels are corrosive. They will attack the fuel system to some degree. It is best to have a separate fuel cell for the different fuels you use.”

While most foam withstands corrosive, alcohol-based fuels such as ethanol, other components of your fuel system may struggle. Deterioration of those items can lead to blockages at your fuel filter.

“E85 is really tough on gaskets,” said Culp. “Viton gaskets are the best, but they are expensive. Nitrile rubber gaskets are a good choice, as long as they are premium, military grade. We study specs first on any nitrile rubber we will use for a gasket.”

“Not every bladder is rated for E85,” Dack said. “Some bladders are capable of handling multiple fuels. [Many] bladders are primarily for one fuel only.

“The change of fuel causes a delamination of the bladder’s inner and outer coating from the base fabric, which is usually Kevlar or nylon. The coatings blister. The fuel cell seems okay, because it is effectively holding fuel. But in a crash, it comes apart. This is particularly dangerous.”

Ultimately, match the fuel with your fuel cell and take care of the cell. Manufacturers said that if you do so, you should not only experience no issues with foam breaking apart and clogging your fuel filter, but you’ll be ensuring the fuel cell performs when you need it most.