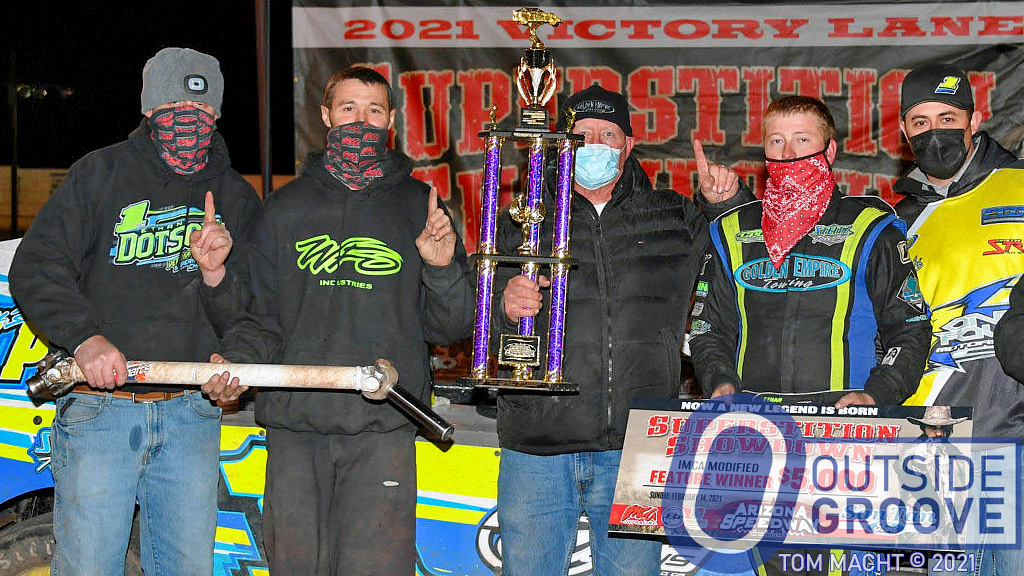 After Ethan Dotson took the checkered flag, he realized he had no power. Dotson had just won the IMCA modified feature held on Sunday during the Superstition Showdown at Arizona Speedway in Queen Creek.

“My car spit the driveline out after the checkered flag,” Dotson, of Bakersfield, California, said. “There was no vibration and no noise. The rear end was fine and the driveshaft was fine. All I could keep thinking is how lucky I was. It dropped out on the cool-down lap.”

A loose driveshaft not only ends a racer’s night early. It also creates a hazardous situation that can injure drivers and spectators.

Dotson theorized the rear end yoke failed due to age. Pat Fagen, of Fast Shafts by Axle Exchange, Inc., offered his advice on avoiding this kind of issue.

“The rear end yoke should be not only checked, but carefully looked at as part of regular maintenance,” said Fagen. “If a yoke has to be replaced because of damage or after a set number of laps, a new bolt and washer should always be used. It is very important that Loctite be used on the bolt’s threads.”

“That driveshaft has strong chances of survival,” Fagen said. “It can be flung from a race car and won’t be damaged.”

Dotson rolled into victory and celebrated with his crew — and yes, the driveshaft, too. Back home, the 2019 IMCA Speedway Motors Super Nationals champion returned to preparing for the rest of 2021. (See “Ethan Dotson: Crisscrossing the Country for Racing”.)

“I don’t know yet where we are going — I’m playing it by ear,” said Dotson of his plans for this season. “We’ll be hitting the bigger IMCA races in the Midwest, for sure.”

Definitely expect Ethan Dotson to add inspecting the rear end yoke to the maintenance checklist as he chases wins in IMCA modified competition.