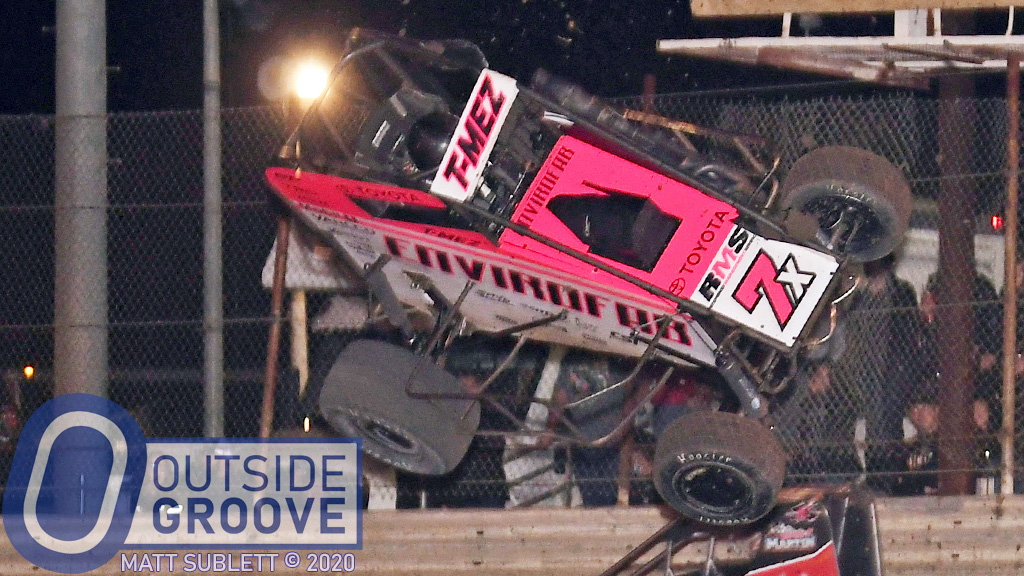 In his first night out at California’s Merced Speedway, Thomas Meseraull, aka “T-Mez,” scored the USAC Nos Energy Drink National Midget Series win — his second career triumph on the circuit. The next night, however, didn’t go as well.

“Friday night, Daison Pursley chased me down and then flipped on the white-flag lap,” Meseraull, of Waveland, Indiana, said. “Saturday night it was my turn. Jesse [Love, see “Jesse Love: A Teenager Who Does His Homework”] showed me no love and came down on me. My car tipped over and then cartwheeled end over end three times. I saw I was getting a lot of altitude, so I closed my eyes and hoped for the best.”

Meseraull was not injured. He sat in a full-containment seat from Ultra Shield Race Products, with Crow Enterprizes belts. He wore a Bell helmet and used an Impact Racing Accel head-and-neck restraint system. The incident broke the front axle and twisted the frame of his car from Spike Chassis.

“[Crew chief] Donnie [Gentry] knocked it out of the park with the setup,” said Meseraull. “We were middle of the pack in qualifying [on Friday]. With a few adjustments we came to life to win our heat race and start fourth in the feature and win it.”

The following night a broken driveshaft put Meseraull behind the eight ball. He started ninth in his heat race and was moving up through the field before the flip occurred.

“We scratched [after the flip for the rest of the night],” Meseraull said. “There was no point in trying to fix the car to start in the back of the C-main.”