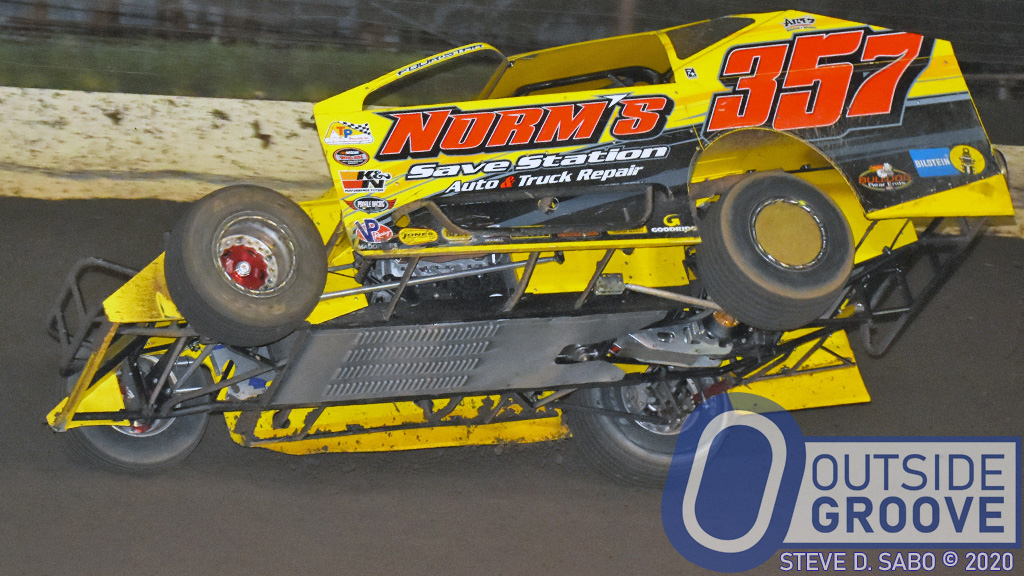 Things got a bit wild for Duane Howard during the modified heat race at Grandview Speedway in Bechtelsville, Pennsylvania. A shower had wet the track between hot laps and heats, making the track surface exceptionally tacky.

“For a modified to react like that, you have to hit a divot in the track just right, at the same time you are getting on the gas,” Howard, 57, of Oley Township, Pennsylvania, said of his car going on two wheels. “These modifieds are set up to pin the right side when you go through the turn, grabbing as much adhesion as you can.”

Luckily, Howard knows a thing or two about steering a race car after 37 years of racing. His accolades include nearly 300 wins. His owns 14 track championships — six at Grandview and eight at Big Diamond Speedway in Pottsville, Pennsylvania.

“You turn to the right when that happens,” said Howard of how he reacted to the incident. “Many drivers might not know that — [going on your two right wheels] happens so infrequently.”

After Howard wrestled the car back down, the entire field passed him. The top four finishers in each of the four heat races fill the first 16 starting positions in the feature. Howard qualified for the feature through the consi. He started the main event in 22nd position and moved through the field to finish ninth.

“It was a tough night for us,” Howard said. “We set our goal to finish in the top five every week.”

Considering how Duane Howard avoided near catastrophe during his heat race, qualified for the feature, and finished in the top-10, many would call that a great night. However, at the ultra-competitive Grandview Speedway, all it takes is one small hiccup to create major repercussions in the championship battle. Howard slipped to third in the points standings, behind Craig Von Dohren and Doug Manmiller.