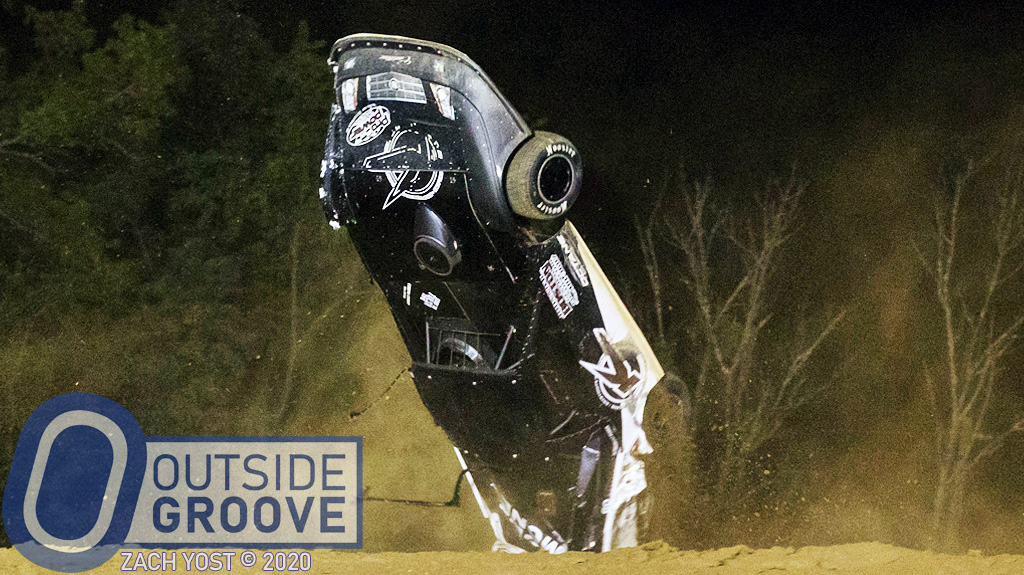 Freddie Carpenter took off to the skies after his late model made contact with Josh Rice’s. They were battling for second at Atomic Speedway in Waverly, Ohio.

“I thought I was on my way to the moon,” said Carpenter, 49, of Parkersburg, West Virginia. “In turns three and four, [Rice] did a slide job on me, so I crossed over and rubbed him slightly. When we got to turn one, he retaliated by giving me a nudge in the door.”

Carpenter’s car went up on the track, hooked the cushion, flipped through the air, and then barrel-rolled to land on all fours.

“The crash ranks up there as one of my worst — and I’ve been racing late models for 22 years,” Carpenter said. “The car was reduced to junk — a total loss.”

While the car didn’t survive, Carpenter did, although albeit a bit beat up.

For his ride to the sky, Carpenter used a car built out of his shop, Kryptonite Racecars. He sat in an Ultra Shield Race Products full-containment seat, with an Impact five-point harness, and he wore a Simpson Hybrid head-and-neck restraint system, with an Impact helmet.

Freddie Carpenter finished 18th in the 20-car field. Rice placed 15th after officials sent him to the rear for contact with Carpenter’s car. R.J. Conley, of Wheelersburg, Ohio, won the $3,022-to-win feature.

After race ended, a fracas in the pits ensued from the incident.

“Nobody left my pits and nobody left [Rice’s] trailer,” Carpenter said. “That group argument was just a big bunch of passionate race fans discussing what they saw.

“Josh would never intentionally send me out of the park. I’m not upset with him. We’re okay with each other.”