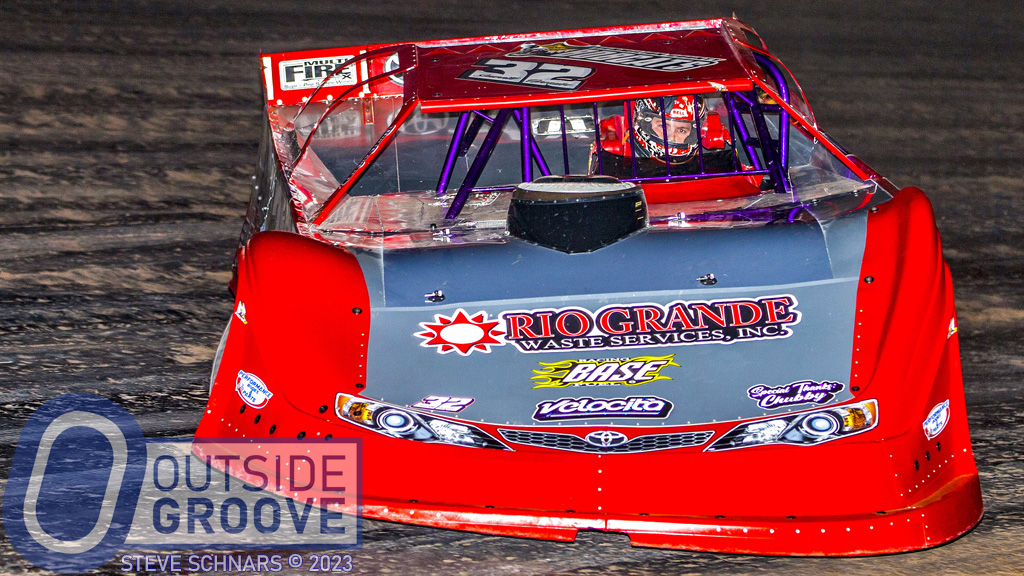 Dirt late model racer Bobby Pierce cut his teeth in the sport while often racing cars built by his father, Bob Pierce. Thus, his switch to Longhorn Chassis raised a few eyebrows. If that didn’t do it, this did — winning two out of the six features during the Wild West Shootout at Vado Speedway Park in New Mexico.

“I felt at home,” Pierce said of his new car. “The Longhorn chassis had a nice base setup coming out of the shop. I adjusted to it well — it took just one lap. The car had a good attitude and balance. That makes it easy for the driver. It surpassed our expectations.”

This is not the first time Pierce raced something other than his family’s chassis. Pierce had run a car from Rocket Chassis five years ago, but returned to his father’s namesake brand. After conversations with Kevin Rumley and Steve Arpin last summer, Pierce switched to Longhorn for 2023.

“I was happy with the Pierce, but we switched to get our foot in the door of the future,” said Pierce. “There is a lot of technology out there, and Longhorn is the leader in technology.”

Pierce said his 71-year-old father looks to slow down his pace a bit at the shop, but also added that he still moves around like a 25-year-old when preparing a new Longhorn.

“My dad is excited,” said Pierce. “He’s been into race cars his whole life, no matter what brand they are. He’s listening, he’s learning, and he is already very smart.”

The tunability of the new chassis appeals to Pierce.

“The Longhorn offers a lot of fine-tuning, so many [things] of which you can do that it offers you more ways than one to skin a cat,” Pierce said.

“Longhorn recommends Bilstein shocks,” said Pierce, “but you still can use which ever brand you choose, like Brandon Sheppard does.”

Perhaps, the biggest advantage running a Longhorn provides is that a driver can tap into the knowledge from some of the best in the business.

“Steve Arpin is on top of the game,” Pierce said. “Matt Langston knows setup for Longhorns like no other, and he’s an all-around good guy. He’s worked with Earl Pearson and Tim McCreadie, and is in the shop now. Kevin Rumley is the expert on Bilstein shocks, and works with Aaron Morey. We talk with all of them regularly.”

Pierce’s connection with Arpin goes back years. When the Pierces picked up their first Longhorn chassis, they brought Arpin a gift.

“I was six or seven years old when I was watching Steve race against my dad,” said Pierce. “I had a photo of Steve, my dad, and Bill Elliott. My dad signed it and we gave it to Steve at the shop.”

Ultimately, the success at Vado Speedway Park made the change from his family brand to Longhorn Chassis that much easier for Bobby Pierce.

“All I can say is that I am glad I made the switch,” Pierce said.