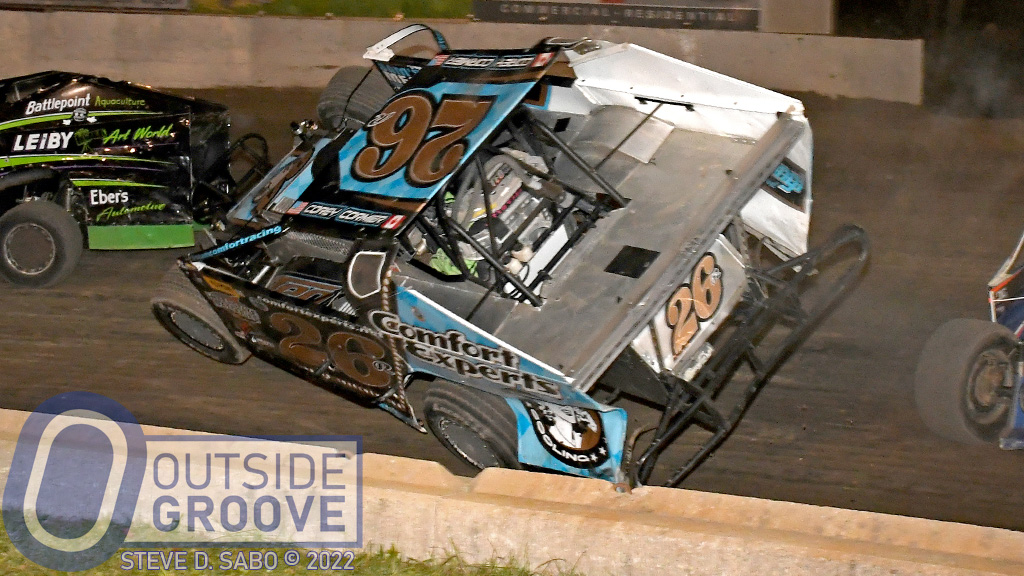 Rookie sportsman driver Mike Mikulski wound up taking a wild ride. It occurred in the feature during The Gobbler at Accord Speedway in New York.

“I only raced a handful of times at Accord Speedway,” Mikulski, 46, of Middletown, New York, said. “I felt I was making progress as a rookie when I finished second in my heat race.”

During the feature, Mikulski was working his way to the front.

“I was on the inside, lower than I thought I was,” said Mikulski. “When I got into the second turn, everyone was jammed up. I thought I could get out of the jam, but I got pinched into the wall.”

Mikulski made contact with the car of Donnie Campbell, which then triggered a sequence of events.

“Our wheels touched, I got hit, and I got launched,” Mikulski said. “My left rear climbed over the wall and then all I could see was the ground rolling around. Somehow, my car landed on all fours.”

Mikulski exited the car uninjured. He sat in a Kirkey full-containment seat, with a Simpson five-point harness. Mikulski wore a RaceQuip helmet paired with a neck collar.

The jury is out on his Teo chassis car, though.

“It’s Thursday night and we are just getting around to taking it out of the trailer,” said Mikulski. “The front end is all bent up. We will have to strip the car down and clean it to assess the damage.”

Regardless, Mike Mikulski will drive a newer, 2021 Teo chassis next season in the sportsman class at Orange County Fair Speedway in Middletown, New York. He hopes to use his wrecked car as a backup.

“I can’t wait to get back on the racetrack,” Mikulski said. “It is too bad it is such a long wait until spring.”