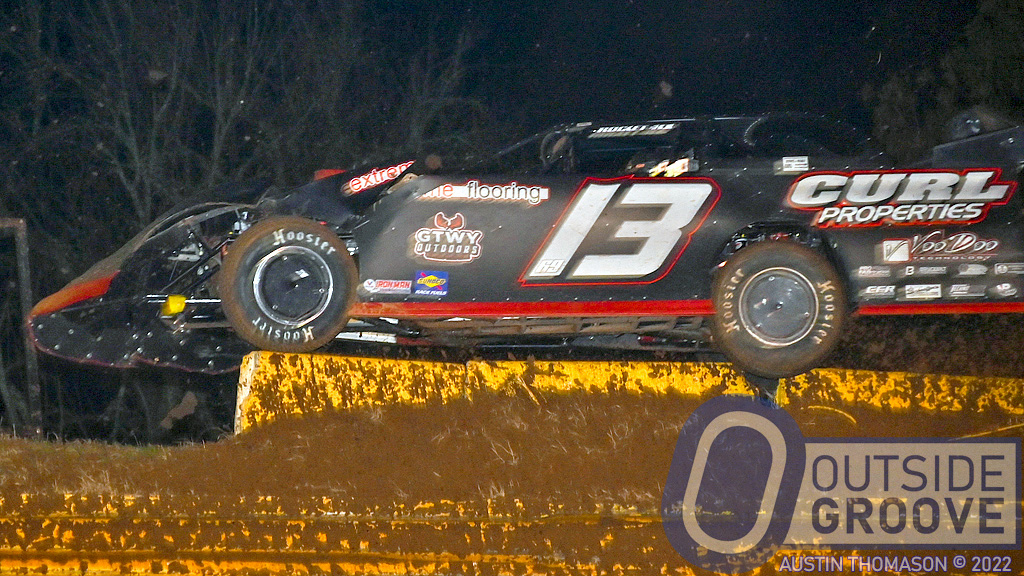 Super late model driver Scott Cook had an eventful weekend for all the wrong reasons. He looked forward to racing the Valvoline Iron-Man Late Model Southern Series’ Deep Fried 75 at Duck River Raceway Park in Wheel, Tennessee. However, rain forced the promoters to move the race to Sunday. This threw a monkey wrench into his plans.

First, after Saturday’s program rained out, his five-year-old daughter, Jayla, slipped and broke her arm. Then, on Sunday morning at 3 a.m., Cook went into Nashville to work as an elevator installer.

“I planned to go into work on Sunday because I needed Friday and Saturday off for the Deep Fried 75,” Cook, 45, of Shelbyville, Tennessee, said. “You have to work before you can play.”

A rain delay on Sunday pushed back the start time later that day, which gave Cook a window of opportunity.

“I called my guys and asked them to get the car to the track,” said Cook. “I would meet them there after work. The plan worked. I got there in time for hot laps.”

Cook started on the outside pole of the feature.

“The track was greasy — I got crossed up and fell back to seventh,” Cook said. “With six laps to go, I was alongside Josh Putnam when he got into the wall. I couldn’t get my car straight, so when he went to the bottom, I went outside and walked the wall. He didn’t do anything wrong.”

Cook’s car hit the wall, got airborne, cleared the wall, and went off the backside of the turn. His late model landed on all fours, collecting a steel fence and caught on fire. The flames triggered Cook’s onboard fire suppression system from Safecraft, which then extinguished the fire.

The crowd showed their appreciation as Cook began to exit the wrecked car.

“When my head popped above the wall, I heard loud cheering,” Cook said. “To hear that was such a great feeling. I want every fan to know how much I appreciated their cheering that I was okay.”

Cook said the accident left his “arm bruised and beat up a bit,” but otherwise he was not injured. He sat in a Kirkey full-containment seat, with a Simpson five-point harness. Cook wore a Simpson helmet paired with a Simpson Hybrid head-and-neck restraint system.

His Rocket Chassis XR1, on the other hand needed to return to the manufacturer for repairs.

“I’ve been racing late models for 20 years,” Cook said, “and it had been a long time since I wrecked that hard.”

Scott Cook looks to return into action at for the Valvoline Iron-Man Late Model Southern Series stop at Boyd’s Speedway in Ringgold, Georgia, on November 19.

“It just happened to be my own late model that I wrecked at Duck River Raceway Park,” said Cook. “I’m lucky and thankful that [sponsor] Greg [Curl] has another super late model.”