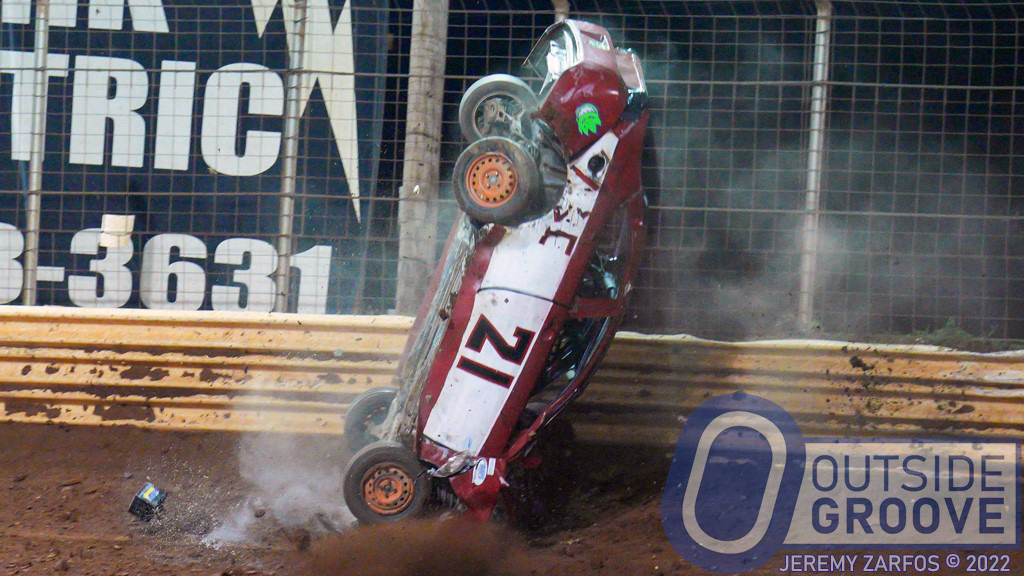 “My right-rear wheel caught a rut, and it flipped me over,” Titus, 19, of Berwick, Pennsylvania, said. “It happened so fast, I couldn’t correct.”

Despite rolling his Ford Focus, Titus emerged from the wreck unharmed.

“I wasn’t hurt at all — I got out of my car and waved,” said Titus. “My girlfriend [Brooke Stout] said she almost fell out of the grandstand when she started to run toward me.”

Titus wore a G-Force Racing Gear helmet paired with a RaceQuip helmet. He sat a Kirkey seat, with a RaceQuip five-point harness. Titus will retire the wrecked Ford Focus. He had purchased it just for dirt racing.

“I had four Ford F-250 rims with tires that I traded for the Focus,” Titus said. “But, now I will have to look for another car to race on dirt.”

Titus first started racing on pavement, competing at Evergreen Raceway in Drums, Pennsylvania. He drove the “Hairy X” of Matt Wentz in the novice class for three races. His friend, Larry Spencer III, helped broker that deal for Titus.

“I met Larry at my new job — we fill acetylene tanks,” said Titus. “I told him I had only been to the races at Evergreen twice with my dad. Larry was involved in racing there his whole life. I told him I wanted to race, and he helped me get my first car, which I destroyed. Larry first made sure I was ok, and then he said it was the worst four-cylinder crash he had seen in years.”

Riley Titus said he’s working with Spencer to get another car so he can race in the novice class next season at Evergreen Raceway.

“The crash didn’t scare me away,” Titus said. “I’ll be racing for points on pavement, and I’ll find another Focus or Cavalier to drive on dirt.”