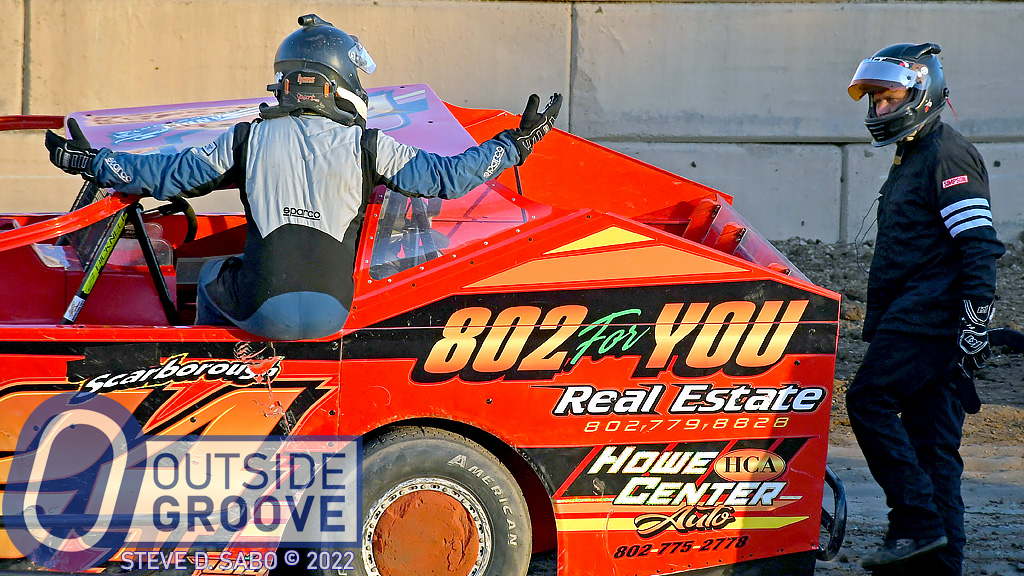 Things got heated between Joey Scarborough and Ryan Stortini during The Gobbler at Accord Speedway in New York. The two crashed after taking the checkered flag during a sportsman heat race. Just before the two were racing side-by-side for third place.

After their cars came to a stop, Stortini exited his to talk with Scarborough on the track.

“[Stortini] asked, ‘Why did I try to put him in the wall?’” Scarborough said. “I said, ‘I didn’t do anything wrong.’ I turned and walked away.”

Stortini explained why he was upset.

“It was totally unnecessary because we were both qualified for the feature,” said Stortini. “Two cars were damaged, and luckily both were repaired in time for the feature. It could have been worse.”

“We were racing for third and I came off the bottom,” Scarborough, 25, of Brandon, Vermont, said. “I felt I kept my line, then I felt his left-front wheel hit my right-rear wheel just past the finish line.

“After the impact, my car jumped his left front, my rear end flying into the air, and then the car stopped immediately. I saw his car was turned into the wall.”

The incident damaged Scarborough’s right-rear wheel and his body.

“It was two drivers racing to the flag,” said Stortini, 48, of Hyde Park, New York. “He leaned on me, I ran out of racetrack and got stuffed into the fence. That’s all there’s to it. It was what they call a racing deal. Sure, I got pretty heated in the moment.”

The incident bent a couple of shocks on Stortini’s car. At the end of the night, Stortini said he tried to approach Scarborough, but he was told he had already left.

“I don’t dislike the guy — he’s a driver just like I am,” Stortini said. “I have no animosity.”

Both drivers made the feature, with Ryan Stortini finishing 11th and Joey Scarborough finishing 13th.

“I’ve been to Accord Speedway twice — earlier in the year my car was too loose and had no forward drive,” said Scarborough, who regularly races at pair of New York dirt ovals — Albany-Saratoga Speedway in Malta and Airborne Speedway in Plattsburgh. “We went to the Gobbler with a new setup. We had more forward drive and the car handled better. Our team made major headway.”

Stortini, a regular at Accord Speedway, is looking forward to next year.

“We’re going to do some different stuff,” Stortini said. “I’ll be driving the sportsman Friday night at Accord Speedway and driving a modified for Black Cat Racing at Orange County Fair Speedway [in Middletown, New York,] on Saturday night.”