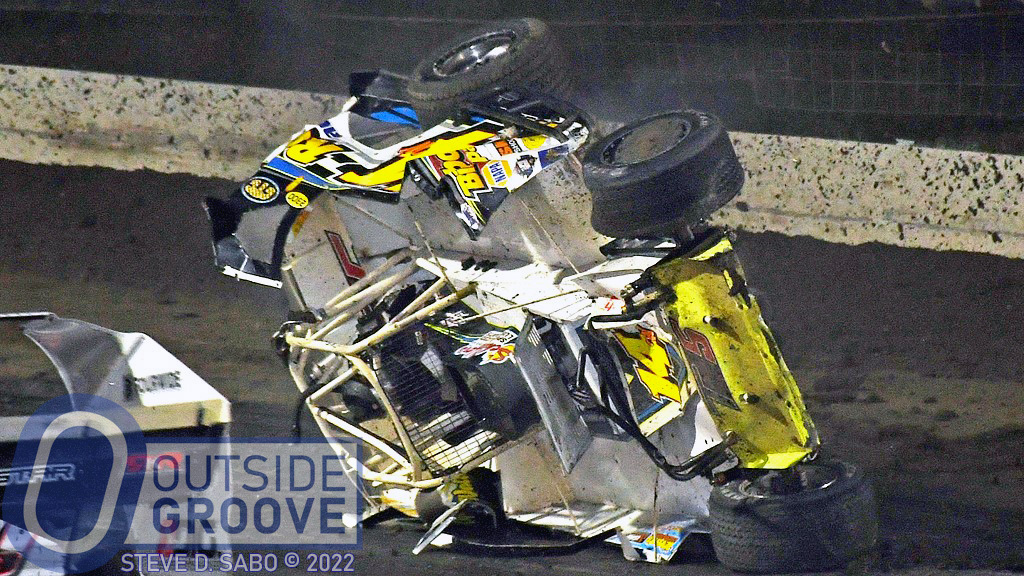 This wreck left Ryan Watt with a concussion. It occurred with two laps to go in the Freedom 76 at Grandview Speedway in Bechtelsville, Pennsylvania.

Watt was running seventh on the outside when his car made contact with the one driven by Michael Storms.

“My car wheel-hopped over his right-front tire,” Watt, of Boyertown, Pennsylvania, said. “As soon as the cars touched, I went airborne at full speed. My car flipped end over end and rolled from the fourth turn all the way down the full length of the front straightaway to the first turn.”

Watt’s 13-year-old son, Logan Watt, raced in the modified feature, too. The night before, he finished second in the sportsman division’s Freedom 38.

“It was the first time we were in a modified feature together, which was special,” said Watt. “Logan stopped on the track [after the accident], and the track officials reassured him that I was okay. He didn’t know how bad the wreck was because he couldn’t see the whole thing to the end.”

The crash destroyed his 2022 chassis from Troyer Dirt Cars.

“The cage was damaged, but it held up well,” Watt said. “It did its job for being as high up in the air I was. The car crashed down from 10 feet up in the air, several times.

Watt sat in a Kirkey full-containment seat and a Crow Safety Gear five-point harness. He wore a Simpson helmet paired with a HANS device.

Immediately after the accident, Watt thought he was okay.

“I felt a little dazed after the crash,” said Watt. “I loaded up the car and headed home.

Watt then headed to the hospital.

“The doctor said I had symptoms of a mild concussion,” Watt said. “He recommended that I not race until the headaches stop. He also said no TV, no phone, no computer — that’s going to be tough.”

Ryan Watt said he’ll most likely sit out for this weekend’s Danny Serrano 100 at Bridgeport Motorsports Park in New Jersey.

“We’ll take a weekend off to hopefully be ready for Georgetown Speedway [in Delaware] the following weekend,” Watt said.