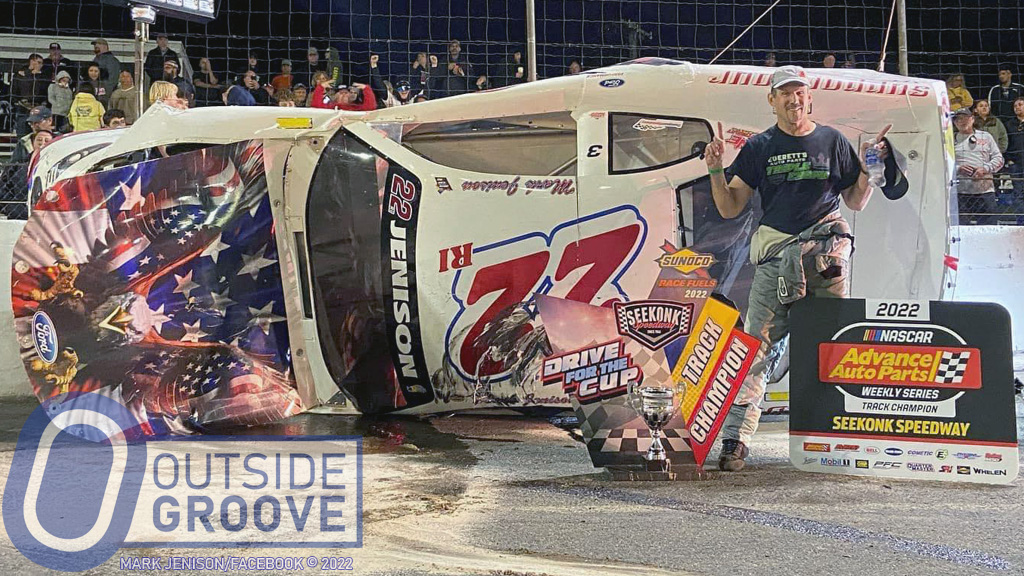 In 24 years of racing, Mark Jenison had never won a championship. This past weekend, he won two. The chase for one title came down to the wire — and Jenison never gave up.

The Moments Leading to the Final Lap

At Seekonk Speedway in Massachusetts, Jenison drives a line different from many of his competitors.

“I’ve made it an art form of figuring out how to run the outside,” said Jenison, a 53-year-old diesel mechanic from Warwick, Rhode Island. “That puts a lot of pressure on the guys who have to beat me on inside, where I’m kind of holding their line in the center [of the turns].”

Throughout the season, Jenison dueled with Chase Belcher for points and position on the track, with Jenison on the outside and Belcher on the inside.

“He and I had the fastest laps that day [of the championship night], and I had beat him in times,” Jenison said. “He said [to me], ‘Hey, are you going to give me a break and let me keep up with you?’ [Chase said that] kidding around. I said, ‘The times don’t mean anything. It’s that last lap that matters. And, I got a feeling that me and you are going to be fighting that out later.’”

Watch out Nostradamus, as those words foreshadowed the night ahead.

“We battle back and forth [throughout the feature] and at the end, I kept edging him out on the top coming out [of the turns],” said Jenison. “Coming into that last lap, he ended up coming into me in [turns] one and two, to get me out of my line. It worked a little bit, I had to run a higher line into [turns] three and four. Coming into three and four, he ran a higher line, too, so I couldn’t get my run coming off. Coming off turn four, he was trying to keep me up high, and I knew I was going to graze the wall. I was still all the way to the floorboard right off the center to coming off the turn. He was also on the floor coming out. I think what happened was he lost where he was, coming up the track.”

“When I came to rest, I didn’t know if I had won or where I was,” Jenison said. “All I knew it was pretty far down the track. I was worried about trying to get out and make sure I was not on fire.”

Jenison exited the car through its right-side window opening. The medical crew took him off the track for evaluation. It was there where he received the news of the outcome of the race.

The track had penalized Belcher for his on-track actions. When everything checked out with the medics, Jenison returned to the track to celebrate.

“[The car] was in a safe position, where they didn’t have to hurry to take it down,” Jenison said. “But, it was flat against the wall, so it wasn’t easy to get it over.”

With the car staying put for a bit, Mark Jenison took his now iconic victory lane photos by his car, where it finished on the track.

Mark Jenison Reflects on the Night

After the celebration, the track crew returned Jenison’s car to his pit, where his team assessed the damage.

“It’s a total loss,” said Jenison of the 2015 chassis from Distance Racing Products. “The whole frame under the right side is bent up.”

Later that night, Mark Jenison won his second championship in the pro stock division. After 24 years of waiting, he now has two titles.

“It was something hard to do,” Jenison said of his championships. “It’s the result of 24 years of fighting hard and working hard for it.

“And it goes to prove you don’t need a brand-new car to win. Just do your due diligence, fight hard, get the car set up right and you’ll go out and win.”