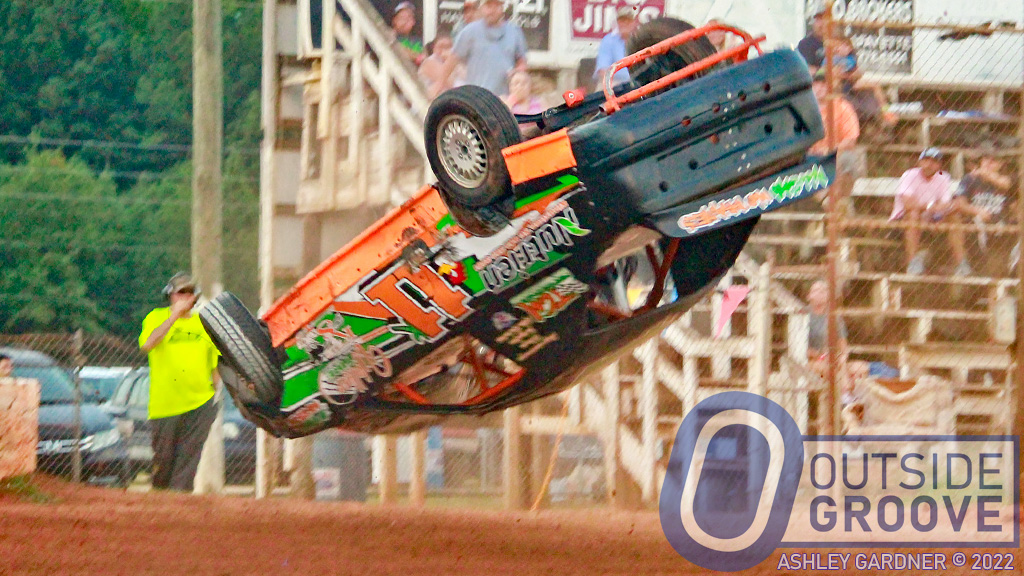 When the extreme 4 feature rolled last Saturday at Sumter Speedway in South Carolina, Wes Keller sat in a good spot. However, his fortunes quickly turned.

“I qualified on the pole in qualifying, and started on the pole [for the feature],” said Keller, 26, of Summerton, South Carolina. “The guy who was in third just run me over on a restart. He got into me in the right rear, enough to hook me and spin me around. He never let off the gas.”

That sent Keller toward the wall, and then he proceeded to roll.

“I didn’t know what was going on until I came to a stop,” Keller said. “I ended up landing on the driver’s door.”

“I was in shock,” said Keller. “The main thing was trying to figure out which way to go. When I landed, I didn’t know which way was up. So, it took me a second to figure out, ‘Okay there’s the ground. That’s too tight to get through. Here’s where I got to go.’ I ended up climbing out of the passenger’s side window.”

They took Keller to the hospital as a precautionary measure. He said besides a sore left rotator cuff and waking up with a headache the next day, he had no further injuries.

Keller sat in a standard Kirkey seat, with a RJS Racing Equipment five-point harness. He wore a G-Force Racing Gear helmet paired with a neck collar.

“The driver’s side hoop bar probably bent down about three inches,” Keller said. “It’s totaled. The only thing I can salvage is the motor and transmission.”

“I knew it was bad, but I didn’t know it was that bad until I went back and watched [the video],” said Keller. “It was disappointing. It was not the first time he took out a leader because he couldn’t pass on the start.”