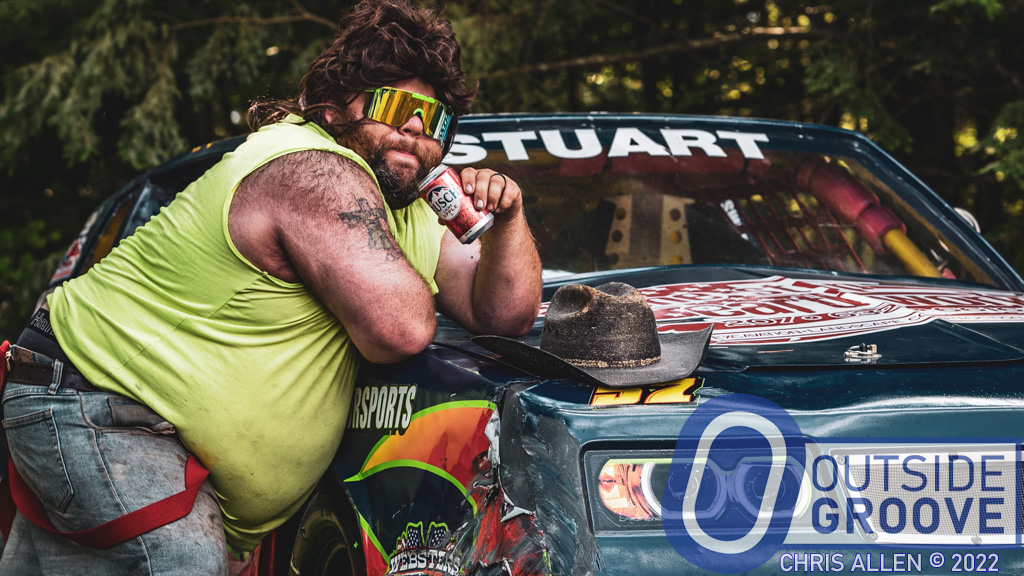 People went wild when Ryan Stuart posed with the Slingshot he races at Star Speedway in Epping, New Hampshire. The shoot came about when area photographer Chris Allen looked to create a calendar featuring drivers. While the effort behind the calendar stalled out, Stuart still wanted to take part. Stuart and Allen eventually connected, resulting in a series of photographs.

“It’s rather surprising how this extreme dad bod got so much attention,” Stuart, a 35-year-old father of two, said. “Initially, it started off as a joke [to do the photoshoot].”

“I was kind of nervous at first — I’m not exactly body-positive,” said Stuart, who resides in Limington, Maine. “I’ve always struggled with my weight. After that first beer for the first two poses, I was like, ‘Let’s let loose. This will be good.’ It definitely helped my nerves afterwards that it was so well received.”

In addition to racing photography, Allen also shoots boudoir. Stuart’s photos have stood out among his portfolio.

“I’ve had people reach out to me from as far as Germany and England,” Allen, of Scarborough, Maine, said. “It was the coolest shoot I’ve ever shot. I create work so that if you’re having a bad day, [when] you see that, you’re going to have a smile on your face.”

After the shoot, Stuart saw an incredibly positive response, too. His said his sponsors loved it and it seems he has earned a few more fans, too.

“It’s been a confidence booster,” said Stuart. “I haven’t gone a day without a comment on Facebook. Before I went to the races [last Saturday], I was walking in my parents’ front yard and I heard somebody say, ‘Stuie! I loved your photos!’ They knew who I am, because they called me by my nickname, but I have no clue who they were. My wife started laughing. She said, ‘You’re picking up friends everywhere you go.’”

No matter how much one may fit the conventional model of beauty, many still remain self-conscious of their bodies — whether it’s weight, a scar, or some other imperfection. Ryan Stuart reminds us that there’s nothing more appealing that someone comfortable in their own skin.

“You don’t have others you need to impress other than those close to you,” Stuart said. “Those close to you, who love you and respect you, they probably already know the issues you got. If anything, do it for them, because they’ll probably get a good laugh out of it.”