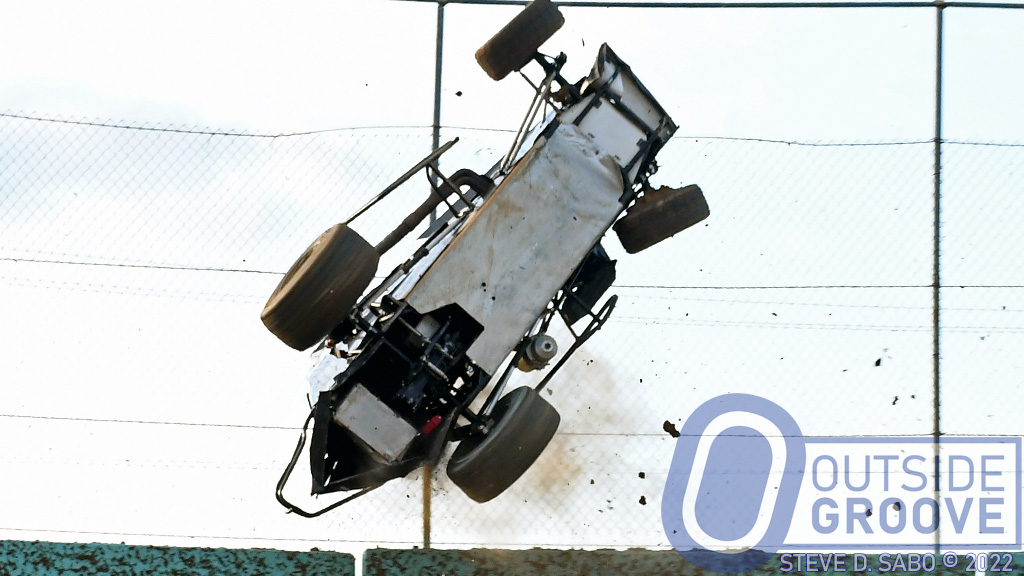 Things were looking up for Ryan Krachun, but he didn’t know how literal that would be. This airborne incident occurred in the SpeedSTR division at Action Track USA in Kutztown, Pennsylvania.

“We went out and won quick time,” Krachun, 23, of Neshanic Station, New Jersey, said. “[In the heat race], we pulled away on the first lap and the second lap we went end over end. The right rear just dug in and hooked the right rear.”

Krachun quickly knew he was in trouble.

On the journey upward, Krachun just held on.

“I was up there — I was eye-level with the catchfence,” Krachun said. “The halo bar landed on the concrete barriers. That’s what totaled the car.”

Fortunately, Krachun took measures to ensure his own safety.

“We just went through the safety equipment the night before,” said Krachun. “It was fit for somebody like 6′5″, maybe 250 lb. I’m 5′9″, 145 lb., so I’m a bit smaller. We moved the seat forward two inches, and put in my Schroth seat belts, which I can pull tighter than the other ones that were in there.”

After Krachun’s car landed on all fours, he walked away.

“I didn’t feel anything — no soreness, nothing,” Krachun said. “I went golfing the next day.”

Krachun credits his safety equipment. He sat in the Kirkey full-containment seat that came with the car. Krachun wore a Bell helmet paired with a HANS device.

“It held up,” said Krachun of the car. “The frame’s junk. Most of the front end’s junk. The rear end is fine — no bent axles — so we should be able to salvage that. But, it put us out of commission for this season in that division.”

While his year has come to a close in the SpeedSTR class, Ryan Krachun will concentrate on the dirt modified he races at area tracks. Those include Bridgeport Motorsports Park and New Egypt Speedway in New Jersey; Big Diamond Speedway and Grandview Speedway in Pennsylvania; and touring races for the Short Track Super Series and Super DIRTcar Series.