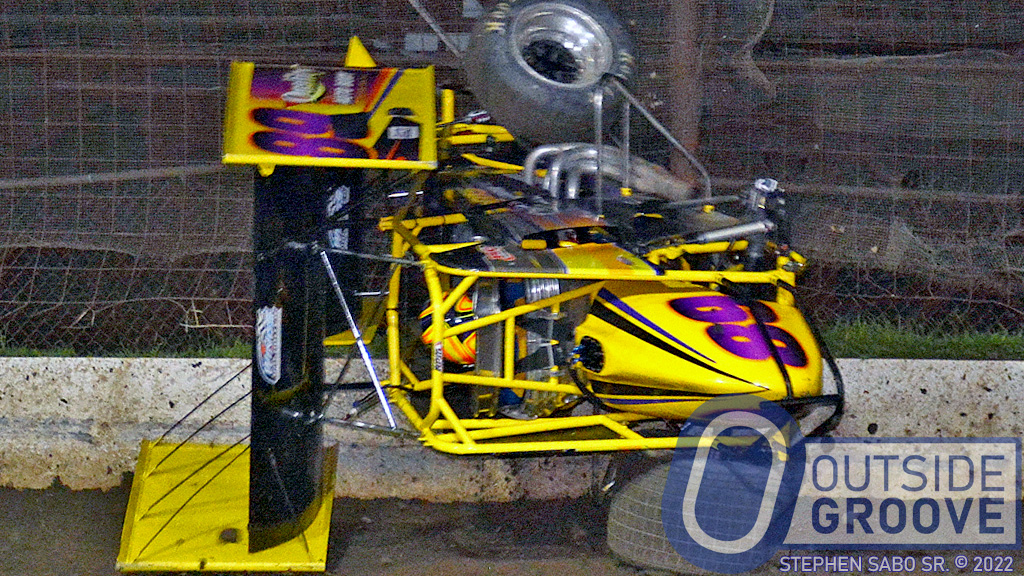 Robbie Stillwaggon tagged the wall between turns three and four, and then turned over his sprint car in a spectacular fashion. The wild action occurred during the United Racing Club (URC) feature at Grandview Speedway in Bechtelsville, Pennsylvania.

The track crew helped Stillwaggon exit from his turned-over sprint car. However, Stillwaggon was not injured.

He sat in a full-containment seat from The Joie of Seating paired with Simpson belts. Stillwaggon wore a Bell helmet and a HANS device.

“I went in too hard, hit the wall, and broke an axle,” said Stillwaggon. “Grandview Speedway is a smaller track than the big ½-milers that we usually race on. It is high-banked and a little racier, though. With the hot weather last week, the track got slimy up top. I entered a half-groove too high and that took me into the wall.”

The racing veteran started in the sport at age five in .25 midgets. He ventured to URC sprint cars in 2007. He won that series’ title in 2012.

These days, Stillwaggon competes primarily locally while he raises a family. His brother, Ryan Stillwaggon races, too, following the entire URC schedule and serves as president of the organization.

Robbie Stillwaggon hopes to repair his RPM chassis in time to race at New Egypt Speedway in New Jersey later this month on August 27. The wreck damaged the front and rear axles, and the wing.

“If we get the parts in time, we will be all right to make the New Egypt race,” Stillwaggon said. “It’s not the time needed to repair the car, it’s the problem that rear ends have been tough to get this year. Rears racers ordered in December are now just arriving. I hate to borrow one from my brother, because he may need it.”