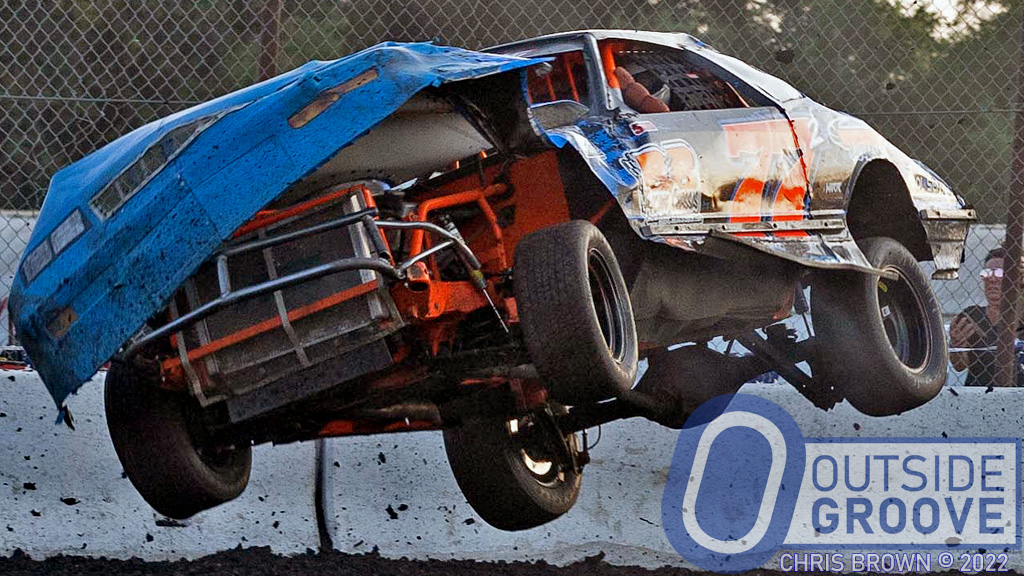 Last Saturday night, Paul Zimmerman went for a ride in his IMCA stock car. It occurred during a heat race at Shelby County Speedway in Harlan, Iowa.

“I rolled a couple times [in a crash] three years ago, but this wreck was different,” said Zimmerman, 35, of Harlan, Iowa. “It all started when I heard my right-front tire pop. It was so loud I heard it over the sound of the engine as I got into the turn.”

Zimmerman started third in his heat, and then fell back to fourth. He was passing to recover his spot as he headed into turn three.

“Right after the pop, my right-front dug into the track and my car was catapulted into the air,” Zimmerman said. “The rolls just wouldn’t stop. I thought, ‘Jeez, when is going to end?’ It just kept coming and coming in slow motion.”

Fortunately, Zimmerman emerged from the wreck uninjured. He sat in a Kirkey full-containment seat, with a five-point harness. He wore a Bell helmet and a neck collar.

“I was conscious the whole time,” said Zimmerman. “When I stopped rolling, I was confused for a second. Then, I realized I landed on all fours. I got my window net down, took my helmet off, and got out — I was worried about fire.”

The car, however, didn’t fare as well. Paul Zimmerman and his 84-year-old father, Andy “Tuffy” Zimmerman, will have their work cut out for them.

“The car is in terrible shape,” Zimmerman said. “The halo was bent down one inch on the passenger side. Powder coating popped off in other locations. I’m sending photos to Paul Burger at B & B Racing Chassis to see if the car is worth saving. It’s a 2015 B & B.”

The wreck did not damage the front and rear suspension, engine, or drivetrain. They drove the car onto the trailer after the crash.

“I planned on finishing the season with that car,” Zimmerman said. “I never won a feature — I won a few heat races — but I support my hometown track every week. It’s going to be all uphill from here for Dad and me. We are a low-budget team.”