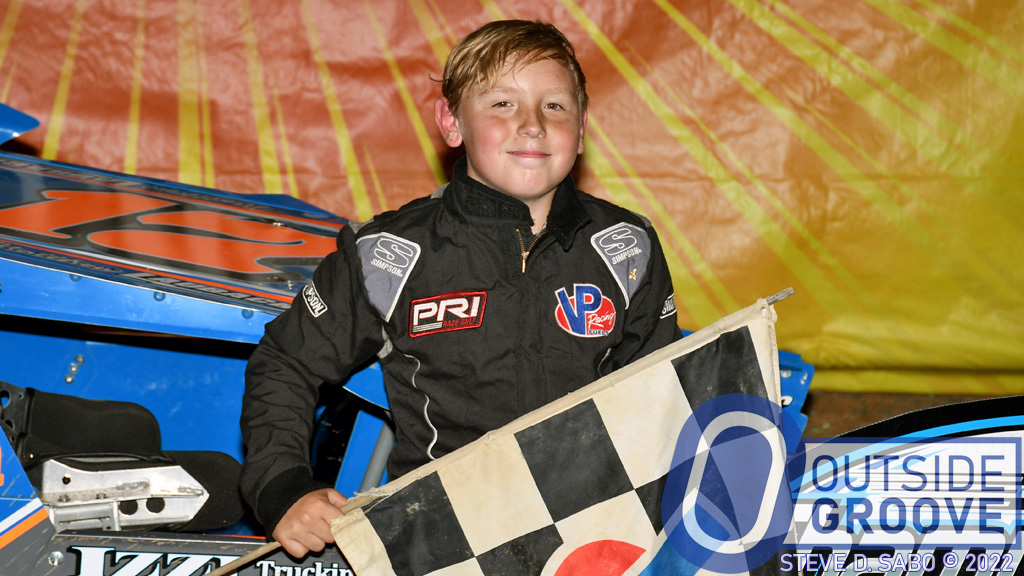 “I don’t know how or why my son is called the “Little Salt Shaker,” except that I’m the big shaker and he is the little shaker,” Rick, of Quakertown, Pennsylvania, said. “He’s been at the races since he was two weeks old.”

Matthew not only won his first junior slingshot race, but also the first race of the year for the Laubach father-and-son duo.

“My goal is to try to win more races than my dad this season,” said Matthew, 11.

The younger Laubach said he did it out of love.

“When I tease my dad, it helps him go faster,” said Matthew. “He teases me, too.”

Matthew and Rick watch their races.

“I show Matthew stuff at the track, and then we critique the videos and I point things out,” Rick said. “He’s matured a lot this year. He has a driving style and knows how the car should be set up. He communicates what he wants to me, and he is usually right.”

Matthew, who will enter sixth grade this fall, had to earn his ride. As part of the conditions for racing, he needed to maintain a report card with As and Bs. When he did, he showed his grades to Josh and Dick Beaver, of Alpha Mills, which in turn earned him a sponsorship. Bob Emmons owns the 20-year-old car. Emmons’ son, Dylan, drove the car. So did Matthew’s mom, Tara, before he was born.

“We spruced the car up, put on a new body, and made it look real professional,” said Rick. “Matthew is always right there with us working on it. He is meticulous.”

Matthew Laubach said among the many lessons his father has taught him, one stands out above the rest.

“My dad always said race the other drivers clean,” Matthew said, “so you can make friends on the track.”