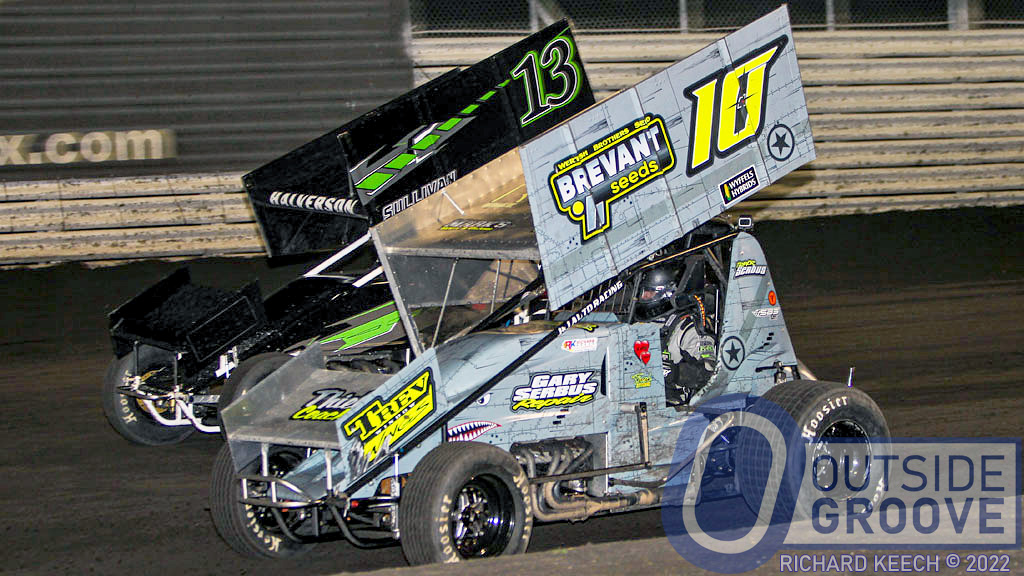 The IMCA RaceSaver sprint car raced by Trevor Serbus pays tribute to the U.S. Air Force. He served in that branch for six years with the 934th Airlift Wing out of the Minneapolis-St. Paul. Air Reserve Station, Minnesota. Serbus visualized what his sprint car might look someday while deployed to Al Udeid Air Base in Qatar.

“My first car was green, with an orange No. 10 and orange roll bars,” Serbus, of Olivia, Minnesota, said. “People called it the ‘Danica Patrick sprint car.’ I was never able to win in that car. So, I changed the paint scheme to the military wrap I wanted to do for a long time.”

In the Air Force, Serbus maintained C-130 Hercules. His sprint car’s looks, however, take after another iconic aircraft.

“Every A-10 Thunderbolt fighter jet has shark teeth on it,” said Serbus. “I was around A-10s while I was deployed, but I never got to work on them. I thought the A-10s were so mean looking.”

Serbus has two track championships at Arlington Raceway and IMCA RaceSaver Minnesota state championships in 2017 and 2021. Recent wins include ones at a pair of Minnesota ovals — Arlington Raceway (June 17) and Jackson Motorplex (June 18). Serbus also has earned trips to victory lane this season at Cedar Lake Speedway in New Richmond, Wisconsin, and Huset’s Speedway in Brandon, South Dakota. While his victories earn him attention, his sprint car’s looks garner even more.

“There is a lot of positive reaction, not just from Air Force veterans, but all veterans,” Serbus said. “The whole idea behind the wrap is to salute all branches of the military.”

Trevor Serbus took his tribute to the United States Armed Forces one step further. He auctioned off parts of his car’s body that needed replacement and donated that money to charities dedicated to serving U.S. veterans.