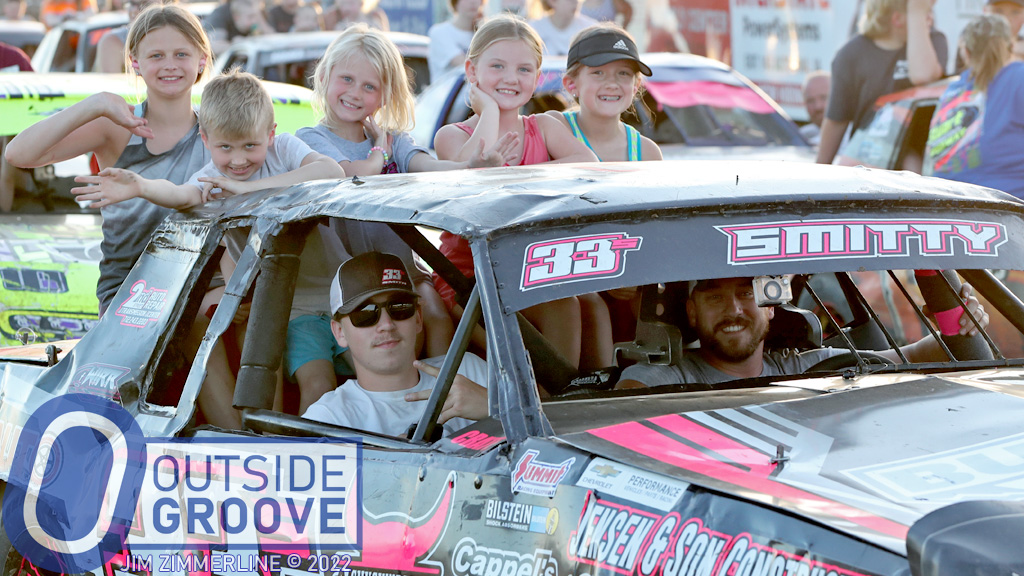 If you want to know what keeps a new racer motivated, look no further than this photo of Jared Smith. It includes five out of six of his kids and one niece at Stuart International Speedway in Iowa. This is what makes it worth it for a low-buck, rookie racer in the IMCA hobby stock class.

Smith never raced in a weekly oval-track division prior to this year. He did autocross and figure 8s, but nothing on a more regular basis. That changed last fall.

“Last October, I got enough sponsorship money for a roller,” said Smith, 35, of Adair, Iowa. “I got a hold of my cousin, Shaun Wirtz, who’s raced for 20 years, and he was selling out. He sold me his motor.”

The rookie year for Smith has been challenging.

“The second race I raced, I went to Adams County [Speedway in Corning, Iowa],” Smith said. “A buddy of mine lost control and was coming up the track to me. I went high. I ended up rolling my car seven times.”

With help from his brother-in-law, Blake McCann, he returned to the track at Stuart International Speedway two weeks later.

“The green flag dropped, I made it to the first corner, hit the inside tire, and rolled,” said Smith.

Smith picked up a sponsor, and he then received further support.

“After I rolled, [Jensen] texted me,” Smith said. “He said, ‘I seen you roll again at Stuart, what’s it going to take to get you back to the track?’”

Jensen helped Smith pay for the new parts to get him back on track. Fast forward to last Wednesday, Smith started on the pole and led every lap — until a late caution came out.

“I saw [the leaders] take off, and I could stay with them,” said Smith. “I went into the corner too hard, spun one of the other cars out, and broke my spindle.”

Jared Smith placed eighth. He doesn’t have much money to pour into a race car. Smith works for a farm. He has six kids in a blended family with his wife, Ashley — Javen Smith, 17; Addison Smith, 15 (not pictured); Valia Roen, 10; Ari Roen, 7; Alexa Smith, 7; and Neela Roen 6 (niece Macy McCann, 9, pictured). Yet, he finds not only the money keep on making it to the track, but also the motivation, too.

“It’s quite hard to keep a car running on a low, low budget,” Smith said. “I have a little gremlin in my brain going, ‘You should just quit. You can’t afford this.’ Even though I’m broke, I had two little kids come up to me [after the races] and they still wanted to sit in my car. [They] told me I was their favorite driver. That’s why I do it. That’s what keeps me going.”