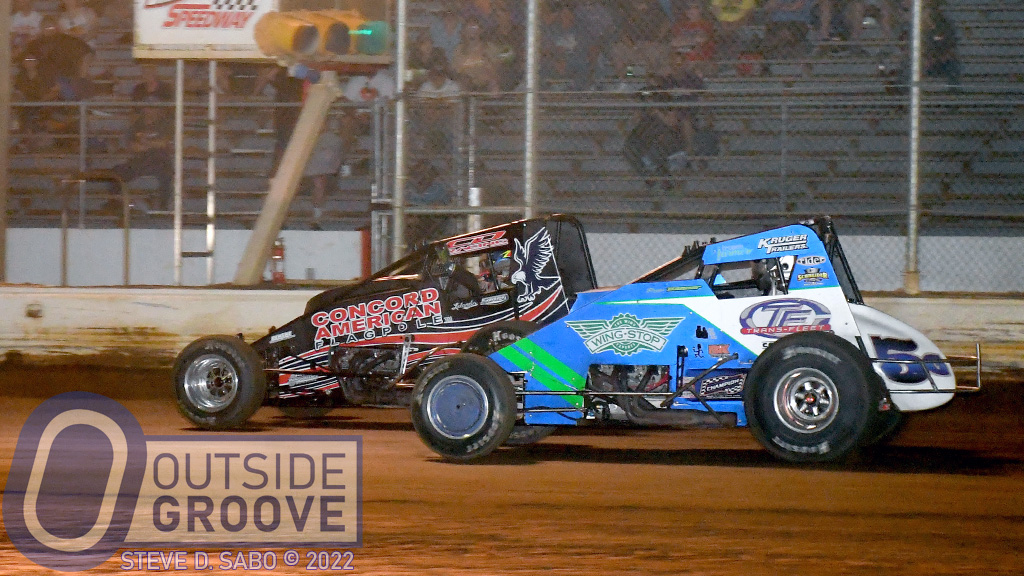 This race will sting for Thomas Meseraull, aka “T-Mez” (pictured on the outside). He ran out of fuel while leading the USAC Eastern Storm June 15 event at Bridgeport Motorsports Park in New Jersey. It occurred with 11 laps to go. It paved the way for Briggs Danner (inside) to assume the lead. Logan Seavey went on to win the feature.

“It’s first class in organization and preparation,” said Meseraull, of the Dyson Racing team. “[They do] an amazing job keeping everything top-notch, clean, and organized.”

Well-known Pennsylvania racer Sean Michael leads the team as crew chief. However, they tasked a new crew member with fueling the car.

“We were in a time crunch,” Meseraull, of San Jose, California, said. “They had a lot of modifieds there, and we figured there would be four or five heat races. But they only ran three.”

Meseraull’s team was caught off guard when USAC officials blew the horn to get ready for the feature.

“We told our guy to put in 26 gallons,” said Meseraull. “I found out later he only had time to put in 15 gallons. When I went out on the track, I had no idea we were short on fuel. [crew chief] Sean [Michael] found out before I found out — I was already on the track.”

When Meseraull ran out of fuel, it brought out the caution. He went off the track, got a refueled, and finished the race.

“I came back and raced from last to an eighth-place finish,” Meseraull said. “That gave me a chance to get my mind off of running out of fuel. When you pull off the track and you’re not on the frontstretch, you didn’t have a good night.”

For racers pushing the envelope, running out of fuel happens, and that holds true for Thomas Meseraull.

“Oh yeah, I’ve run out of fuel while leading at least a half-dozen times in my career,” said Meseraull. “It’s a calculation and sometimes you miss.”