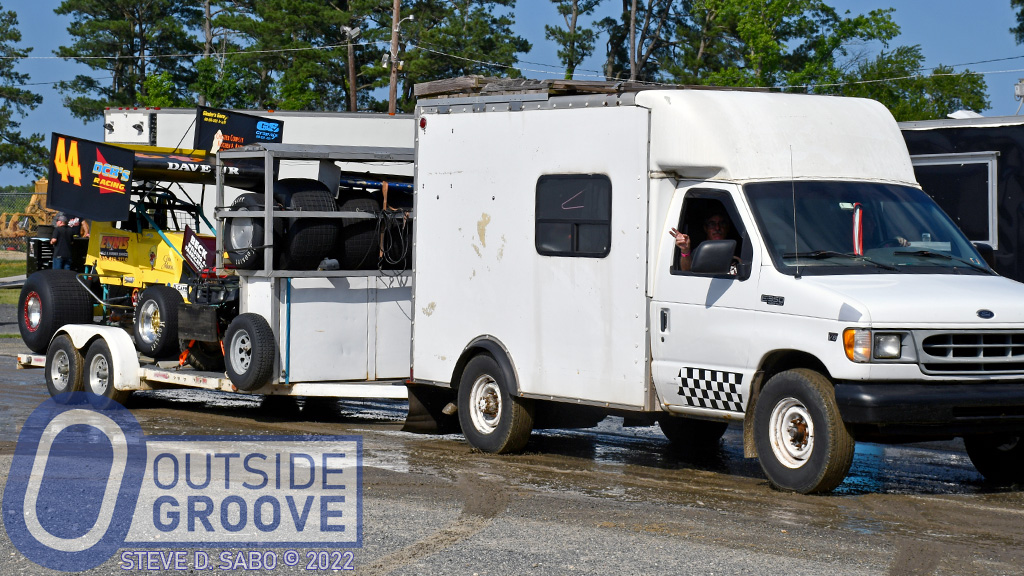 Dave Brown Jr. just racked up his third win of the year last Friday in the Mid-Atlantic Sprint Series. The IMCA RaceSaver sprint racer achieved the feat at Georgetown Speedway in Delaware. He hauled his winning ride with this vehicle and trailer.

“You don’t need a big toter and big trailer to be fast,” Brown, 31, of Aston, Pennsylvania. “We’re not making payments on the truck or trailer, so we can spend money on what makes you go fast.”

His modest race car mover consists of a 2003 Ford diesel truck paired with an open trailer.

“The rig’s got about 200,000 miles on it, and it’s still going,” said Brown. “My dad outfitted it in back with two captain’s chairs. We can hang a couple of rear tires off the walls. We have a spare rear, front axles, radius rods, and fuel.

“My dad got the trailer, painted it, and built the tire rack that sits on top of the toolbox. The race car fits on there with the four-wheeler perfectly. Shocks hang off the side of the trailer, covered up. There are torsion bars sitting inside the box on the front of the trailer.”

The hauler doesn’t come without its drawbacks, though. Of course, when it rains, things get wet. Brown typically doesn’t carry an extra wing with the configuration. And, during long hauls, such as to the RaceSaver Nationals at Eagle Raceway in Nebraska, it may lack a few creature comforts.

“It’s a rattlebox inside — not quiet at all,” Brown said. “The front cab is open to the back. So, all the parts that are rattling around and making noise along the road, you hear it.”

Fortunately, Dave Brown Jr. doesn’t make many cross-country trips. While the trailer has its drawbacks, it offers a wealth of benefits, some of which go beyond the immediately tangible.

“You go down a highway and people give you a thumbs-up, they beep at you and smile, and take pictures — that’s pretty cool,” said Brown. “All the sponsors on my car, they get publicity driving down the road — that’s a positive.”