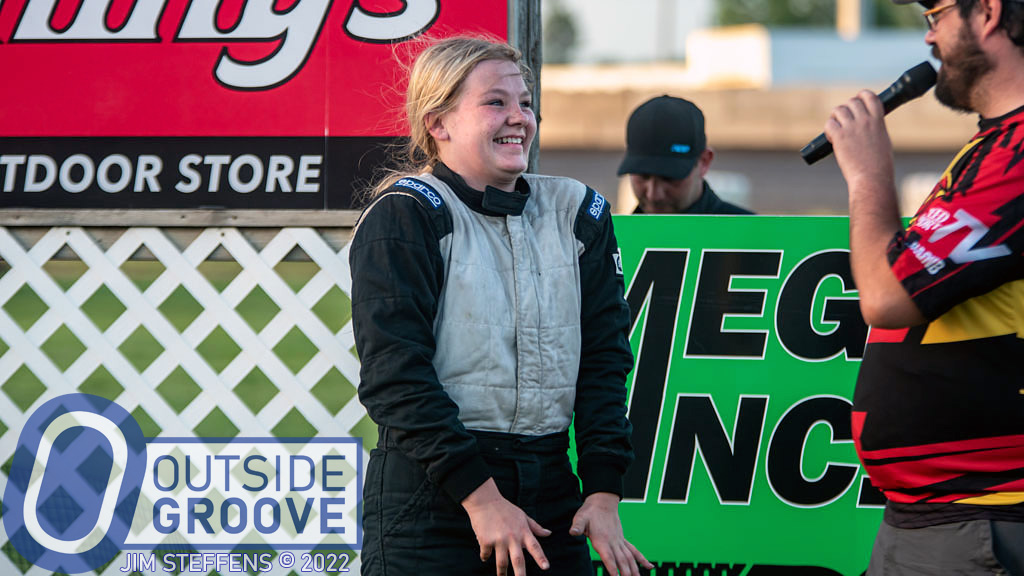 Two weeks ago, Brooke Osler rolled her sport compact over the wall while going for the win on the last lap, in the last turn. This past Saturday, she won, scoring the first feature victory of her career. Both the setback and the comeback occurred in the IMCA sport compact class at Worthington Speedway in Minnesota.

“I wanted to prove everyone wrong,” Osler, 14, of Milford, Iowa, said. “A lot of people made comments that they thought I would be too scared to get back into my car.”

Osler did not come from a racing family.

“I saw friends race in karts, and thought they were the coolest thing in the world,” said Osler. “I convinced my parents to buy me a kart.”

She raced in karts from when age seven until last year. She then moved into sport compacts. The accident two weeks ago occurred in only her fourth outing in the ride.

“I was on the inside, a half car ahead of Kaytee DeVries, when our cars came into contact,” Osler said. “My car rolled twice and then went over the wall. I closed my eyes super tight when I crashed. I don’t remember anything.”

Osler sat in a Kirkey full-containment seat, with a RaceQuip five-point harness. She paired a Impact Racing helmet with a Simpson head-and-neck restraint.

“When I showed up for softball practice the next day, the coaches saw videos online and wanted me to be checked for a concussion,” said Osler. “They found that I had one. They told me to rest and sit out from softball for a week.”

Osler’s week only had five days. She returned behind the wheel on Saturday night.

“My car looked worse than it was,” Osler said. “It did have a bent bar in the roll cage, so we cut it out and replaced it.”

She started the feature on the outside of the first row. She gained the lead, and then lost it to Jason Bolte, of Odin, Minnesota, on a restart.

“I passed Jason on the last lap,” said Osler. “He left the door open, and I went for it. I was in shock that I won.”

With softball filling her schedule, Brooke Osler will race only at Worthington Speedway through July.

“When softball season is over, I would like to try to race my sport compact at some other tracks,” Osler said. “Then, after August, my days will be taken by basketball, volleyball and track — I throw the discus and shot put.”