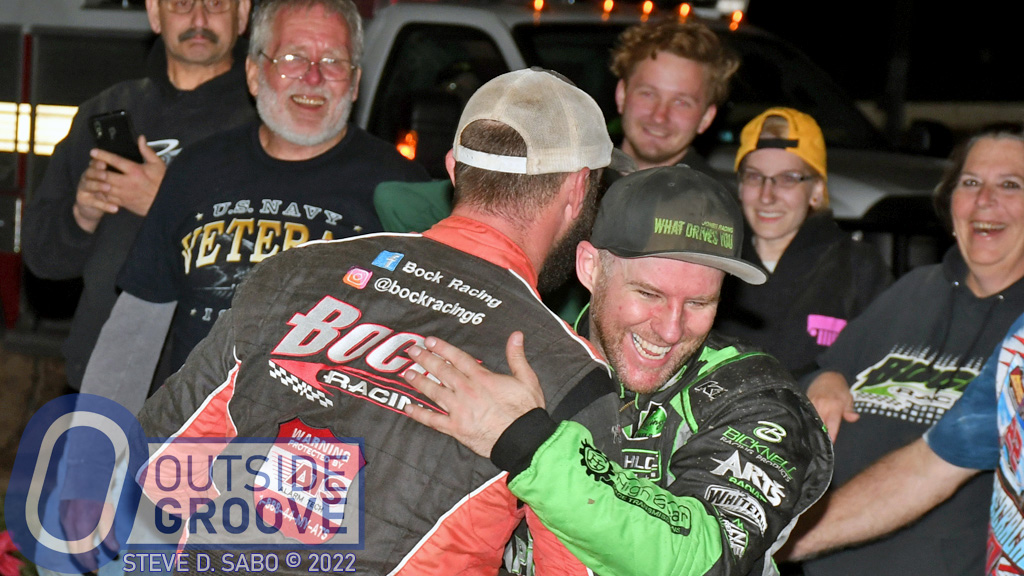 Brian Hirthler (right) rushed to become the first to congratulate Kenny Bock on the win. Hirthler had the best seat in the house to watch Bock’s run — Hirthler had finished second. Bock’s triumph occurred in the sportsman division at Grandview Speedway in Bechtelsville, Pennsylvania.

“With all the restarts we had, I knew that Brian would be coming at me at some point in the race,” Bock, of Oley, Pennsylvania, said. “I stayed on the bottom from start to finish. I knew he likes the high side. After the checkered flag, I realized he was right there.”

Bock has a deep respect for Hirthler. (For more on Hirthler, read “Brian Hirthler: A Day He’ll Remember”.)

“Six years ago, when I started racing, he was — and continues to be — one of those guys who you race with that you could always ask a question and get an honest answer,” said Bock. “He’s been a good buddy of mine from the start.”

The win didn’t come without other stress. The feature had eight restarts. Fortunately, Bock kept the lead, from start to finish.

Bock’s parents, Kelly and Greg, also joined in the post-race celebrations. The Greg Bock helps his son prepare his car.

“My parents are my car owners,” said Bock. “It was my mom’s idea to go dirt racing. My dad, who used to be a drag racer, is my crew chief. When I was in high school, we’d always go to Grandview Speedway between baseball and wrestling tournaments. The ’76er was a must every year. And, now, we are here racing.”

Bock’s win snapped a long streak of bad luck that extended into last season. (See “Kenny Bock: Landed Upside-Down Against the Wall”.) His friends, such as Hirthler, understood what that victory meant to Kenny Bock.

“To win was relieving for sure, we went through many long months of trials and tribulations — caught up in messes, and wrecking our car,” said Bock. “Winning was a good confidence boost for the whole team.”