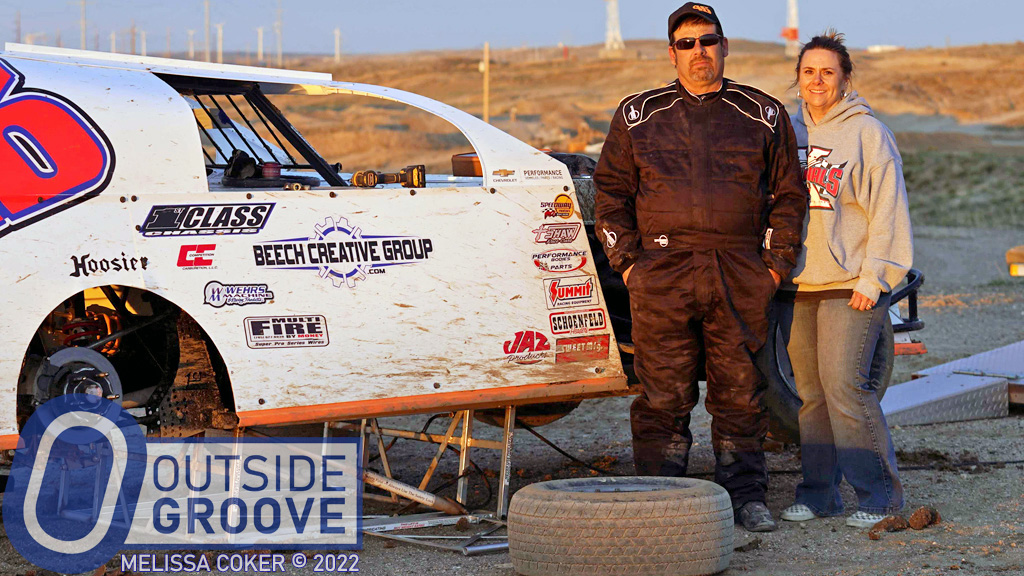 Operating a racetrack in Wyoming, such as Sweetwater Speedway in Rock Springs, has its challenges. It is the least densely populated state in the contiguous United States, with only six people per square mile. However, promoter Kara Beech (pictured with husband, Bert) has built a thriving track. It draws cars from 15 states and averages 1,500 to 2,000 fans a weekend.

The track’s location also limits the length of its season.

“We’ve got a snow forecast for this weekend — one week before our season opener,” Beech said. “We’re at 6,800 feet above sea level, so the season is Memorial Day to Labor Day — five weekends. No one wants to freeze their butts off at the races.”

“We can’t run over the top of each other,” said Beech. “We have a lot of the same drivers, so the tracks have to work together. Sweetwater Speedway is three and a half hours from Casper Speedway, which is a short distance compared to the other tracks that our drivers race at.”

“No one gets paid,” Beech said. “We are all volunteers.”

That includes Beech herself. She earns a living as a regional coordinator for the University of Wyoming Center on Aging. Beech volunteers her time to manage Sweetwater Speedway.

She keeps the track’s books open to the volunteers. It shows them what it takes to operate the facility, which includes expenses for insurance, electricity, purses.

Fortunately, Sweetwater Speedway sees its fair share of volunteers. Some are unofficial. Beech spotted a man picking up trash caught in the fence.

“He said he wanted to help get [the track] ready for the races,” said Beech said. “I thanked him and handed him two free passes. We allow people to stay in our camping spots, and they usually volunteer to help.”

Beech’s understanding of her market helped build the crowds.

“Unless you like dirt-track racing, you are going to attend to watch a family member, a friend, or a coworker,” Beech said. “We have to build relationships. Sweetwater Speedway consistently promotes its events. We work closely with the chamber of commerce, and built a following on social media.”

Some of the track’s fans venture to Sweetwater County, where Sweetwater Speedway is located, for other things than racing. The area boasts of numerous natural attractions, such as the largest moving sand dunes in the U.S. and Flaming Gorge National Recreation Area.

“There are 1,500 camping spaces available here,” said Beech. “Fans can come and play. There is enough to do in this community to stay and recreate before or after the races.”

Sweetwater Speedway runs an IMCA-sanctioned two-day program once a month, from Memorial Day to Labor Day. A few touring series make appearances, including the American Sprint Car Series (ASCS) Frontier region and the High Plains Late Model Series. Whatever the class, they all race on a big 3/8-mile oval with 25-degree banking.

“It’s a fast track — it can be intimidating,” Beech said. “When you stand on the bottom of the track and look up, you realize how steep it is. That’s what makes it attractive to drivers.”

Regardless, of who’s on the track, Beech said family, friends, sponsors, and those unrelated to her all receive the same treatment.

“When I say I’m going to do something, I’m going to do it,” Beech said. “I started eight years ago promising I would enforce the rules, even if it comes to DQ-ing my husband.”

She means what she says.

“I’ve kicked Bert off the track,” said Beech. “That’s the way it goes. You have to follow the rules. I have to be consistent. You bring out one caution in a heat or two in the main, whether you caused it or were involved in it, you’re out!”

The car counts — and the crowds prove that something’s working at Sweetwater Speedway.

(For more on Tafoya, read “Regan Tafoya: Wrapped His Car for a Friend’s Cause”.)