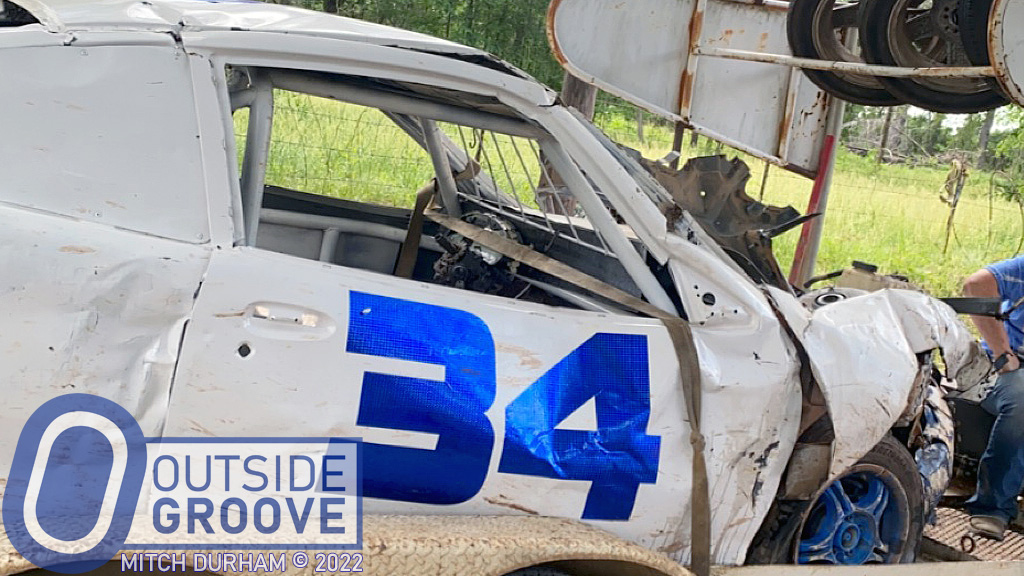 Mitch Durham is now well on the road to recovery after a hard crash. It occurred on April 29 in the tuner feature at the 67 Speedway of Texarkana in Texas. He was making a move for fourth spot when disaster struck coming out of turn four.

“I had a lapped car on the bottom, and another car above me on the track — there was nowhere to go,” Durham, of Simms, Texas, said. “I ramped tires with the car above me and that slammed me straight into the wall full-throttle.”

“I blacked out at the moment of impact,” said Durham. “When I got my vision back, I undid my belts and window net, and slid out of the car on my belly.”

What happened next concerned the track’s safety crew and onlookers.

“I sat up and went out,” Durham said. “The next thing I remember was being strapped to a backboard, with a neck collar on, in the back of an ambulance.”

Durham said he suffered injuries to his lower spine, neck, knee, and collarbone.

“The good Lord was watching over me,” said Durham. “I had deep bruising and lots of pain. I’m still in pain, but I’m getting better day-by-day. The crash was not fun.”

Durham sat in a full-containment seat from Ultra Shield Race Products, with a five-point RaceQuip harness. He wore a Simpson helmet paired with a RaceQuip neck brace.

“I’m starting over from square one, so it will take me a few weeks to get back,” Durham said. “So many people have called and texted me. It meant a lot to me to know I have a great racing family looking out for me.”