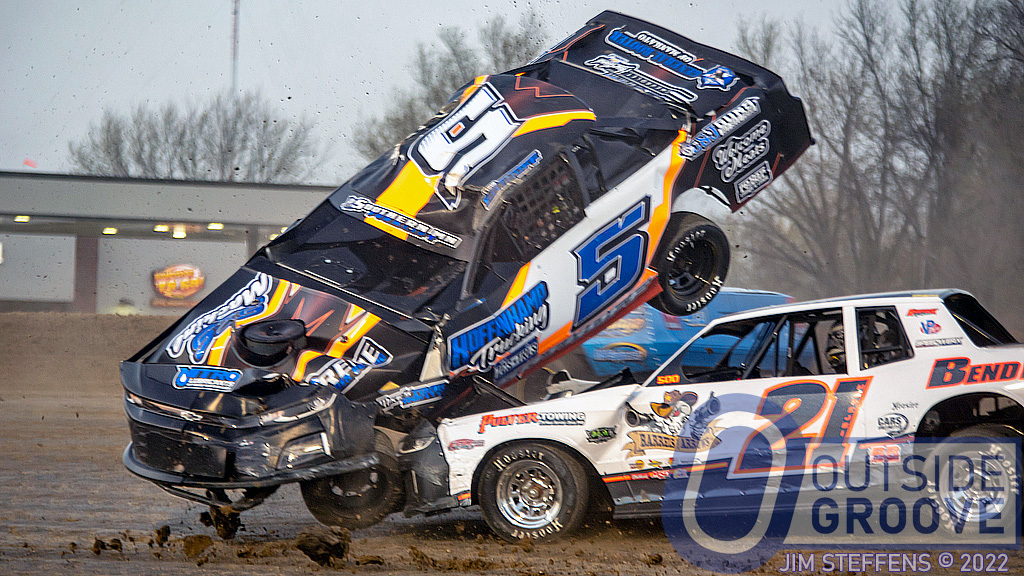 The stock car of Luke Sathoff clipped an infield tire, which launched him into the skies. His car landed on the hood of the car driven by Jim Horejsi. The wild incident occurred during a heat race at Monday’s Clay County Frost Buster event hosted by Clay County Fair Speedway in Spencer, Iowa.

“That’s not the way to begin the season,” Sathoff, of Jackson, Minnesota, said. “It was our first stock car race of 2022. I was three-wide, running on the inside, where I found a strip of grip I was going to use to get by the other cars”

Sathoff’s no rookie to racing. He enters his 20th season with 111 feature victories and 14 track championships.

“It was the third time in my career that I went over,” said Sathoff. “It was the first time that I got launched by a tire. I’ve been pretty good at running the bottom of the track, cutting the fine edge next to those tires.”

“There were some bars bent in the front,” Sathoff said. “The radiator and radiator support bars have to be replaced. There was no damage to the chassis — even the bumper was straight. The body panels could be straightened. Well give the car a good check over, making sure the shocks are okay.”

And, most importantly, Sathoff walked away without injury. He sat in a ButlerBuilt full-containment with a five-point Simpson harness. Sathoff wore a Bell helmet paired with a NecksGen head-and-neck restraint.

Luke Sathoff looked to compete in 50 to 60 events among two classes of cars. He’ll race his late model next on Friday at Rapid Speedway in Rock Rapids, South Dakota. Stahoff starts racing his stock car on Wednesdays at Fairmont Raceway in Minnesota next week. He bounces around from track to track on Thursdays, Fridays, and Sundays. On Saturday, Sathoff calls Minnesota’s Worthington Speedway home.