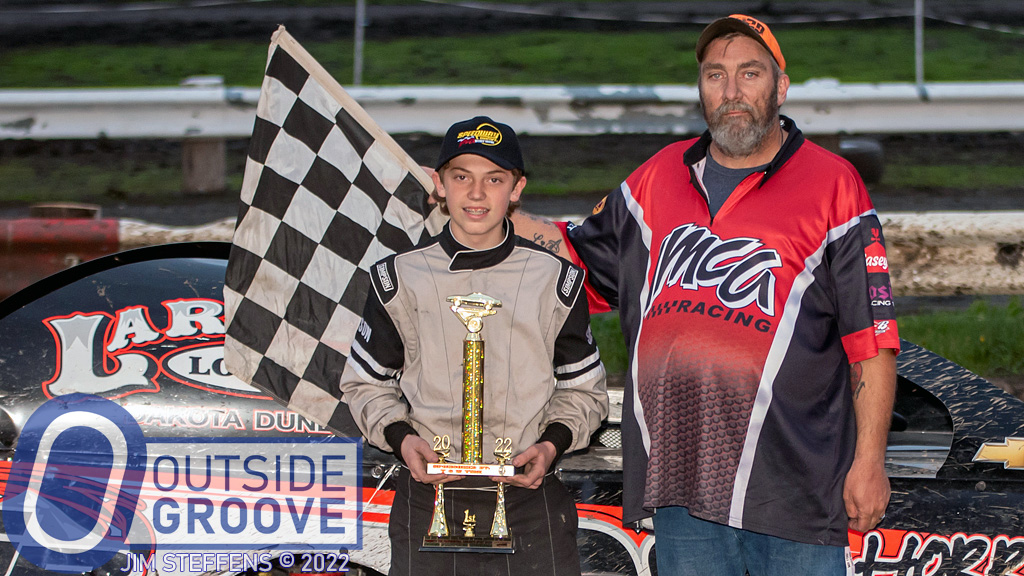 This past weekend, 15-year-old Willy Kirk won his first IMCA-sanctioned sport mod feature at Raceway Park in Jefferson, South Dakota. He competed at NASCAR-sanctioned tracks last season, but looks to make his mark in the IMCA world this year.

“I can race three or four nights a week in the IMCA sport mod division, and all of the tracks are an hour to an hour and a half from home,” Kirk, of Sloan, Iowa, said. “I would like to race for Rookie of the Year in IMCA and be in contention for track championships at my home tracks.”

Last season, Kirk moved into sport mods from outlaw karts. He raced under NASCAR Advance Auto Parts Weekly Series banner at I-80 Speedway in Greenwood, Nebraska, and Adams County Speedway in Corning, Iowa. By the end of the season, he won two sport mod features.

“I felt that sport mods would be most similar to an outlaw kart,” said Kirk. “Both cars need excellent throttle control in the turns. You have to keep them straight to win.”

Kirk learned all about throttle control from his father, Dirk, a former racer himself.

“My dad taught me very much,” Kirk said. “If there is one lesson he has taught me, it is throttle control — it’s the difference in driving on slick tracks and heavy tracks. He taught me to keep the car under me and not to overdrive it.”

Willy Kirk put that knowledge to use. This past Sunday, he battled against Gregg Hamman, of Kingsley, Iowa, and Rusty Montagne, of North Sioux City, South Dakota, to earn the win. It gave Kirk a taste of what’s to come this season in his campaign for Rookie of the Year.

“The competition is really difficult in the IMCA sport mod division,” Kirk said. “It’s tough competition that makes you a better driver.”