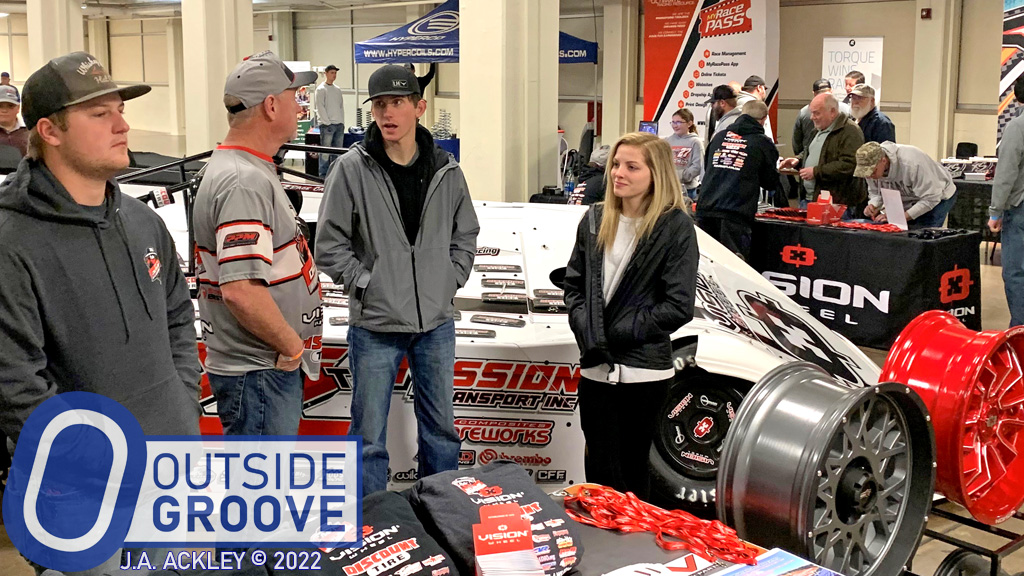 In less than two months, show organizers put together the Outside Groove Racing Show Presented by the U.S. Motorsports Association. Despite the limited time to prepare, just about everyone agreed that the show delivered a hit in its inaugural edition.

The Jacob Building at Chilhowee Park in Knoxville, Tennessee, hosted the event. It brought all forms of motorsports from Eastern Tennessee under one roof. As attendees walked in, they immediately saw the diversity of the sport.

The brightly colored dirt late model of Barry Goodman in the Mountain View Raceway booth and the camo-wrapped, LS-powered, BMW drift car of Connor O’Sully were at the right. On the left, the Classic dirt-oval car of Shaun Sise in the Outside Groove booth and the Corvette of road racer Tracy Gaudu represented RacingJunk.com. In the middle of the show, the historic 1970 Chevrolet Camaro of hall-of-fame drag racer Bill “Grumpy” Jenkins. Just beyond the entrance, Tenny Rally Consulting had a Subaru rally car.

However, the show was far from being only a car show.

Attendees interacted with exhibitors offering giveaways, such that of RacingJunk.com and the Vision Wheel Topless Outlaw Dirt Racing Series presented by Discount Tire. Fullmoon Graphics demonstrated how to wrap a dirt late model. Racers took advantage of the opportunity to upgrade their safety equipment in the Velocita USA booth. They also found great deals in the swap meet section.

Old-timers and those with a nostalgic heart enjoyed the Atomic Speedway and East Tennessee Racing History exhibit. It featured the ride once raced by Cleve Jones and the Tootle Estes tribute car of Joshua Sneed. Legends, such as Herman Goddard, Duayne Hommel, Billy Palmer, and Joey Standridge, John Stout, Jimmy “Pup” Thomas, were in attendance.

With their first show in the books, the Outside Groove Racing Show Presented by the U.S. Motorsports Association looks forward to building on a solid foundation for 2023.