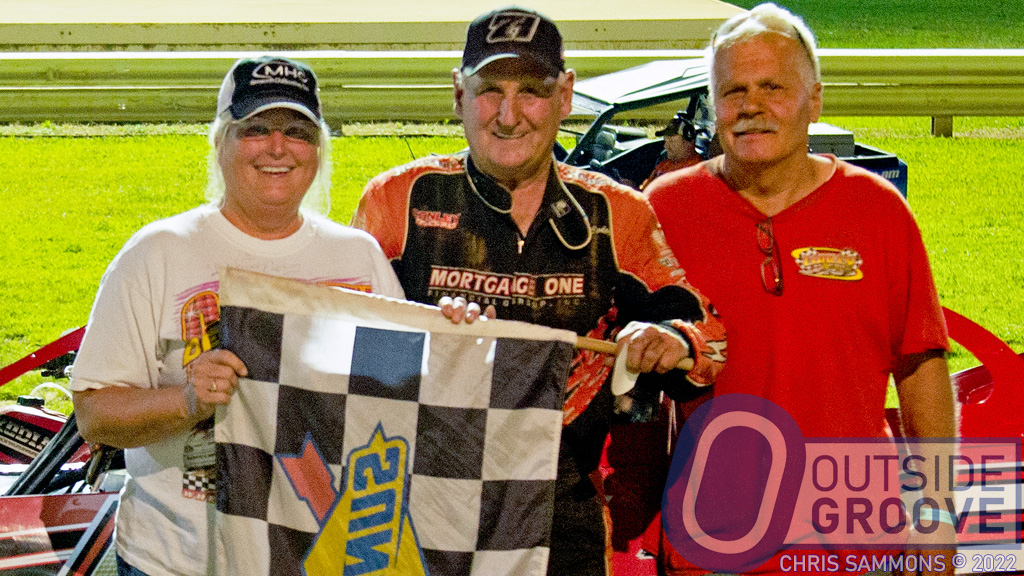 Earlier this month, Wheelersburg, Ohio, driver Delmas Conley passed away on January 4. Many remember him for his 561 feature wins across seven decades, including one this past year, at age 79, at Portsmouth Raceway Park in Ohio (pictured). However, his influence on the racing community stretched far beyond the oval. TJ Layne, PR director and announcer at Ona Speedway in Huntington, West Virginia; Bob Smith, race director for Portsmouth Raceway Park in Ohio; and chassis builder Audie Swartz, of Swartz Race Cars, reflected on what Conley meant to them.

“When I went to my first race … instantly, [Conley] became my favorite driver,” Layne said. “He’s what drove my passion for dirt-track racing. I always thought he was the coolest driver around. Here, you got a hall of famer, with more than 500 wins, owns one of the bigger trucking companies in this region, and he was as humble as he can be. He would always take time to talk with you. He was a friend to anybody who got to know him.”

Smith, 75, South Webster, Ohio, got to know Conley well after Conley hired Smith for his trucking firm. Smith would work for Conley Trucking for 41 years.

“I lost two jobs in 1980 … and I was on unemployment,” said Smith. “I was at Southern Ohio Speedway [now-defunct oval in Wheelersburg] one night, and they were having a practice session. I was sitting in the bleachers, minding my own business, and Delmas walked up. He said, ‘What are you doing now since you lost your job?’ I said, ‘I’m not doing anything. He said, ‘How would you like to drive a truck?’ I said, ‘Might as well.’ It lasted 41 years.”

The Man Between the Rivals

“I always felt like I was part of the [Conley] family, I just didn’t have that last name,” Swartz, 57, of Minford, Ohio. “Dad even one time said, ‘I don’t know if [Delmas] thinks he’s your dad or what.’ Delmas was always good to me, even when Dad and him on the racetrack were like enemies.”

Perhaps, Conley saw a little of himself in Swartz at the time.

“In 1981, I started selling wire tires and silicone, and nobody in the racing deal was using the stuff,” said Swartz. “I remember going to Delmas [and he asked,] ‘How do you sell it, [the silicone]?’

“He said, ‘Give me eight cases of that. What about wire tires?’

“With everything I went to sell to him, he wouldn’t just buy a little — he would overload me. I was out there working, and he appreciated somebody who wanted to work.”

Wisdom for the Ages

No matter the number on your birthday cake, Delmas Conley often delivered bits of wisdom he accumulated over the years

At age 16, Layne started promoting races at the now-defunct Rocky Top Raceway in Coal Grove, Ohio, and then later Southern Ohio Speedway. At that age, Layne had to work with racers who had far more experience than he had years on Earth. However, Conley treated Layne the same as any other promoter.

“He always treated me with the highest respect,” Layne said. “If there was a call that didn’t go his way, there was not one time where he was anything but super respectful. He was somebody that when he spoke, I made sure I listened. You got some guys out there that you know when they try to tell you something, they’re trying to talk you into something that benefits only them. That wasn’t Delmas. When he came to talk with you, you know he was looking out for what was best for your track. He wanted to see it succeed.”

Being a flagman to a racer you work for can prove daunting for some. Conley, though, made it clear to Smith in what he expected.

“He never gave me a bit of trouble at any race I had flagged,” said Smith. “He told me when he hired me, ‘Whatever happens on the racetrack has nothing to do with what you do at the trucking company.’ If I had to black flag him or penalize him, he told me up front that had nothing to do with your job.”

Certainly, Conley left an impression on many through his on-track actions that thrilled the crowds that watched him.

“He was fierce,” Layne said. “Delmas Conley didn’t care who you were, he wouldn’t give you an inch on the track. He always raced hard, but he raced clean.”

Off the track, he was just as fiercely generous.

“He was always a good sport,” said Smith. “If anybody needed anything, he’d help them out with parts or whatever they needed to finish the race.”

That generosity spanned from loaning parts to sometimes monetary loans that he quietly offered. As someone who worked hard to make a living, he had a soft spot for racers trying to make a go at their favorite pastime. Ultimately, Conley understood the circle of life for short-track racing.

“After you had a conversation with Delmas Conley,” Layne said, “you’d always leave smiling and feeling better about yourself.”

And, not only did you feel better about yourself, but you also strived to be better, too.