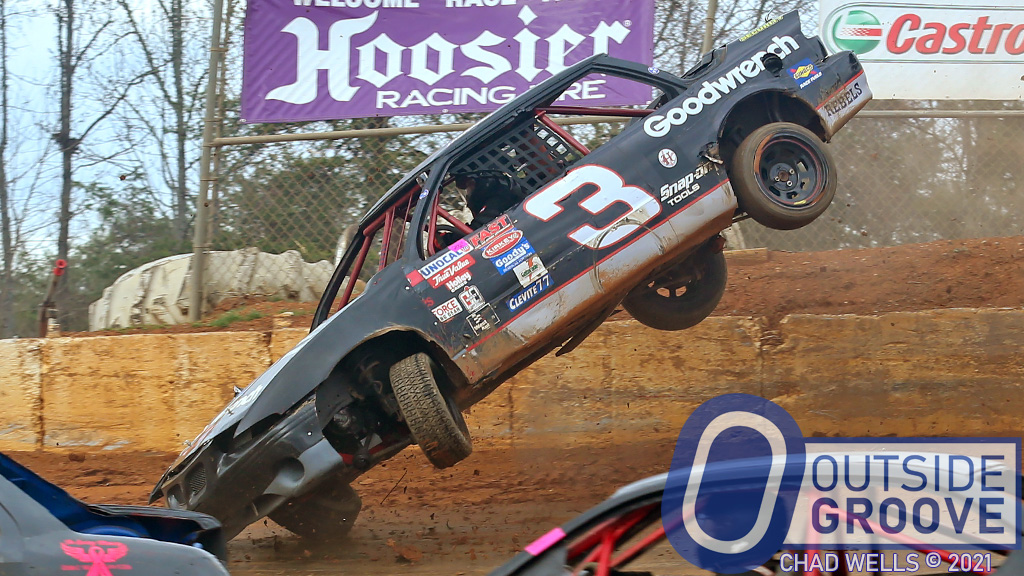 Front-wheel-drive racer Chad Thompson didn’t want to start off 2022 this way. His car hit the turn two wall during feature of The Hangover at 411 Motor Speedway in Seymour, Tennessee, on January 1.

As Thompson’s car came off the turn two wall, it rolled and then landed on all fours. He emerged from the wreck without serious injury. Thompson used a Simpson helmet, Simpson five-point harness, and a racing seat. However, he’s most impressed with the construction of the 1994 Saturn SC2, which features a Pontiac nose and front fenders. Leo Asher, of Piedmont, South Carolina, built the ride initially.

“The roll cage did its job,” said Thompson. “The only part of the roll cage where it has damage is where it hit on the front, top corner. It has a little crease there, and we’ll get that fixed. I’ve been in contact with two of the previous owners [Bruce Wheeler, second owner, of Chesnee, South Carolina, and Steve Rhyne, third owner, of North Carolina] of the car and thanked them for building a safe car.”

Thompson said he has yet to thoroughly assess the damage to his car, but is fairly certain of what caused the crash.

“We feel the left [-front] axle gave out on us,” Thompson said. “I lost all steering and it shot me up to the wall.”

Thompson used to get his “adrenaline fix” with dirt bikes. He bought the front-wheel-drive last year and it has become an activity for his whole family to enjoy. Thompson’s wife, Amy, is 51% owner. His son, Luke, also takes turns steering the car. Luke’s wife, Keylee, Chad’s son, Joshua, and grandson, Jase, also help out.

“We always thought of the idea of racing,” said Thompson. “I was a huge Earnhardt fan. When we saw that wrap, that was a selling [point]. I didn’t care what kind of car it was. We saw it pop up [for sale] and we got it the next day.”

Chad Thompson said they’ll work on repairing the car to race the next event at 411 Motor Speedway, The Sweetheart, on February 19. He and his family are looking forward to spending more time together at the races, although, hopefully with less time in the air.