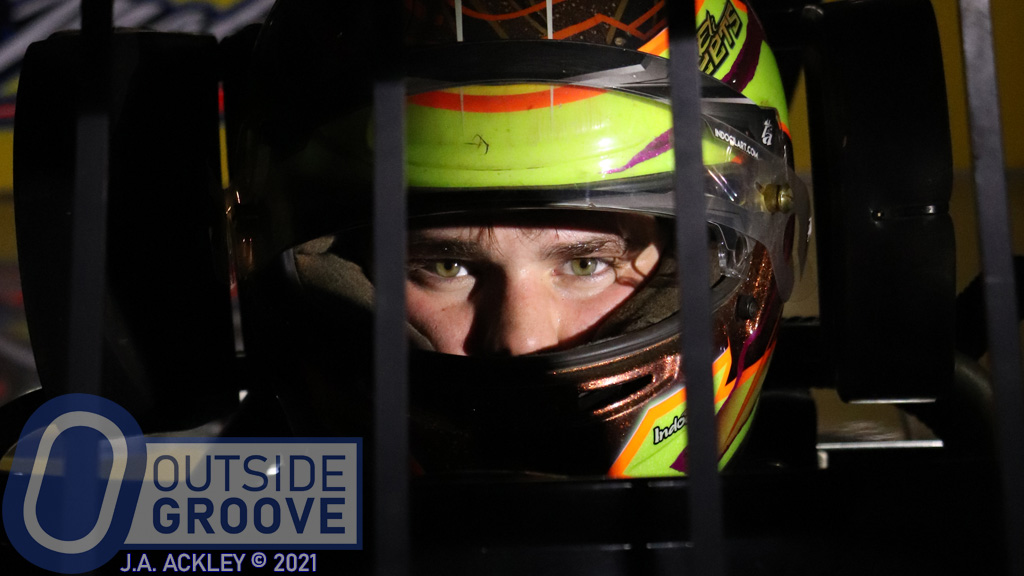 There’s a story behind every photo, and that holds true for Eli Beets. Beets appears on the cover of the book, “Outside Groove: The Best Laps from Short-Track America.” The young racer’s history includes winning $67,000 in a season as a 12-year-old go-kart driver, learning by trial by fire in 604 late models, and competing with legends within his first few super late model races.

Beets’ mother, Linda, felt racing was a good venue for him to channel his energy as a young child.

“My mom got me into racing because she says I was competitive as a kid,” said Beets, 17, of Knoxville, Tennessee. “I wanted to be timed [going] to the mailbox. I’d ask my mom if I beat my times.”

Beginning at age five, Beets started racing go-karts. He competed throughout the Southeast, Midwest, and Mid-Atlantic. He took home numerous wins and trophies, including victories in two classes at the 2015 Maxxis National Championships at the Thunder Valley Mudplex in Neeses, South Carolina.

His uncle, Jeff Treece, entered the hall of fame at Smoky Mountain Speedway in Maryville, Tennessee, this past year. Beets’ father, Jerry, worked on Treece’s late model, which is where he met Linda.

“We always talked about running a late model,” said Beets. “One of my sponsors, TMC Transportation, called my dad and said that we basically won everything that we needed to win in a go-kart and agreed to go get a late model.”

Crate Difficulties and then a Breakthrough

“A lot of people who have raced go-karts and late models, describe [racing late models] as driving a dish rag,” Beets said. “In a go-kart, you don’t have any suspension — the only thing that moves on a kart is the flex of the tires.”

Late models differ from go-karts in another way.

“In a go-kart, you can sit up in your seat, turn around, and see who’s behind you,” said Beets. “You can’t do that in a late model — you’re so strapped in. [I had to learn] where the corners of the car are, how close I am to the wall and to others.”

Then, Beets didn’t stick with one track. As with karts, he kept going to different dirt ovals.

“My first eight races, we raced at six different tracks,” Beets said. “We jumped around a bit. In the long run, it helped me tremendously. Short-term, those first 10 races were a bit rough. It was hard to get settled in.”

After a couple of years of in the 604 late model class, Beets had his breakout season last season. He won his first race, at age 16, at Ponderosa Speedway in Junction City, Kentucky.

“I now have 12 wins in a crate car,” said Beets. “All of a sudden, they just came about. It’s been tough to get wins, but at the same time, I’m proud of what we’ve done, because we’ve never made it easy on ourselves.”

On the Horizon for Eli Beets

Eli Beets started racing super late models this year. His team, which consists primarily of him, his father, and uncle Larry Beets, picked up a standard-bore 434-cid Chevrolet super late model engine. In comparison to 604s, Beets found the biggest difference to be the style of racing in super late models.

“It’s a high-speed chess match,” Beets said of super late model competition. “Every move the drivers make is calculated. When they drop the green, the drivers have already planned on how to pass you.”

Unlike with the 604s, Beets has had a far smoother transition into supers.

“We’ve far exceeded our expectations,” Beets said. “I was just hoping to make races. The first race we went to [with the super] was the Governor’s Cup, a Southern All Star Racing Series race at the Talladega Short Track [in Eastaboga, Alabama], and we finished sixth among [45 cars entered]. Then, we ran another Southern All Star Racing Series event at Smoky Mountain Speedway. We finished third to [winner] Dale McDowell and Payton Freeman. I don’t think I’ll ever hang my head running third to Dale McDowell. He’s a legend.”

Beets looks to race primarily supers in 2022, if not entirely in that class. He’ll travel to a variety of tracks, as he has always done, but he hopes to race the full Schaeffer’s Oil Southern Nationals Series circuit. The 12-race mini series takes place within the span of 15 days. That provides plenty of learning at an accelerated pace — and that’s right up the alley for Beets, who loves to race (and learn) as fast as he can.