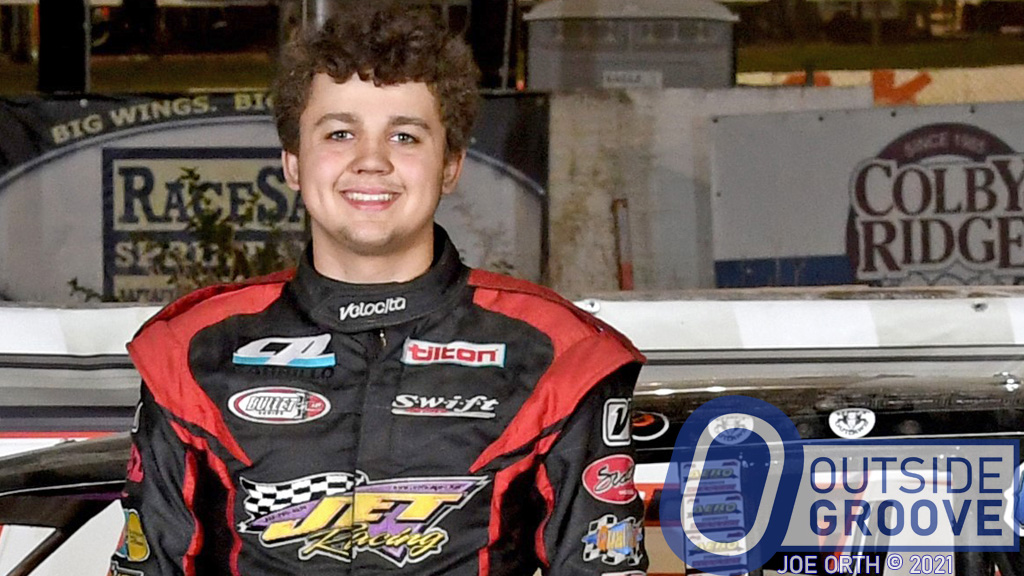 Cade Richards set the world on fire in his official rookie year in an IMCA stock car. He earned 14 feature victories, two track championships, the IMCA Nebraska state crown, and the IMCA national rookie of the year. Richards’ incredible journey to this point began when he first buckled into a stock car at age 14.

“I never paid attention to the stock car division,” Richards, 17, of Lincoln, Nebraska, said. “[Blake Peeler] offered [me] a ride in a stock car for a mechanics race at Bethany Fairgrounds Speedway in Missouri. I liked driving it. The track was slick, the car was heavy, and the racing was so close — door to door.”

At the time, Richards had just started racing sport mods. He traveled along with his father, Matt, who competed in sprint cars. The father-and-son duo constructed their own stock car following his experience in the mechanics race.

“We talked about how cool it would be to build a stock car from scratch,” said Richards. “It was fun to learn on our own. I’m proud of the research my dad and I did. The car worked well the first time we took it out.”

Richards raced the stock car and sport mod in 2020. With the sport mod, he won the 2019 IMCA national rookie of the year. The following season, he earned the 2020 track sport mod title at Dawson County Raceway in Lexington, Nebraska.

When the rear end failed in Richards’ sport mod after six races into the 2021 season, Richards concentrated on racing the stock car five nights a week. Due to the Covid-19 pandemic, IMCA opened up the 2021 rookie of the year title to those who were eligible the previous season, but did not win the award.

“Racing against the greatest stock car drivers taught me a lot,” Richards said. “To race with drivers like Mike Nichols, Jordan Grabouski, and Kyle Vanover is so exciting and valuable to me as a rookie. To actually win while racing side-by-side with them was so rewarding.”

His efforts scored him the stock car track championships at a pair of Nebraska dirt ovals — Beatrice Speedway and Eagle Raceway. In addition to the IMCA national rookie of the year award in the division, he finished second in IMCA national points.

Now, Cade Richards looks to carry his success to the IMCA modifieds.

“We have to keep moving,” said Richards. “It’s the next step to take after racing a stock car. I watched my dad race a mod and move up to the sprint car division.”