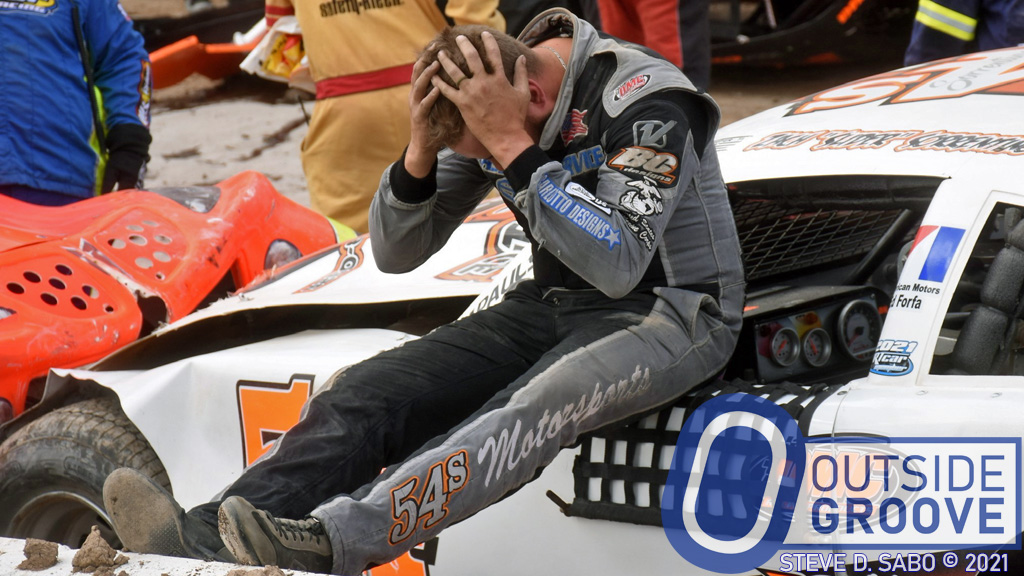 The body language of Zachary Sorrentino said it all. After starting 18th, he had worked his way to contending for the ninth spot when a pileup eliminated him from competition. The incident occurred during the pro stock feature of Super DIRT Week at Oswego Speedway in New York.

“I saw Rich Crane’s car flipping at the top of the track,” Sorrentino, of Lee, Massachusetts, said. “There were parts flying through the dust, and I went for the bottom, along with the other cars, trying to avoid the flipping car. Jay Casey got turned around and we collided nose to nose.”

Sorrentino emerged from the wreck with no serious injuries, with sore shoulders as his chief complaint. He sat in a Kirkey full-containment seat, with a Simpson five-point harness. Sorrentino wore a Simpson Diamonback helmet paired with a Simpson Hybrid Pro head-and-neck restraint.

The crash damaged primarily the front end components of his 2009 EMS Motorsports car.

“The track officials told me to get out of the car because there was fuel leaking from one of the other cars,” said Sorrentino. “First, I made sure Jay was all right. Then, I checked my car and determined that the damage was terminal. I sat there and was overcome by disappointment. We went to Oswego Speedway with the goal of qualifying for the feature. We exceeded that goal, and I was anticipating a great finish. I felt I had a machine that was a lot better than leaving on the back of a tow truck.”

Sorrentino started racing in 2015. With the same car, he competed in the pure stocks at Lebanon Valley Speedway in West Lebanon, New York, and the street stocks at New York’s Fonda Speedway. Sorrentino moved into the pro stocks midway this season.

“I love racing in this division,” Sorrentino said. “The speeds are faster, and everything happens quicker than it does when racing my street stock. With the accelerated pace, you have to be up on the wheel all the time.”

On Tuesday, Zachary Sorrentino and his crew were assessing the full extent of the damage to the car. They hope to next race in the Eastern States Weekend on October 21–24 at Orange County Fair Speedway in Middletown, New York.

“If it is feasible to get the car back together, considering the time and money necessary to do so, we will be there,” said Sorrentino.