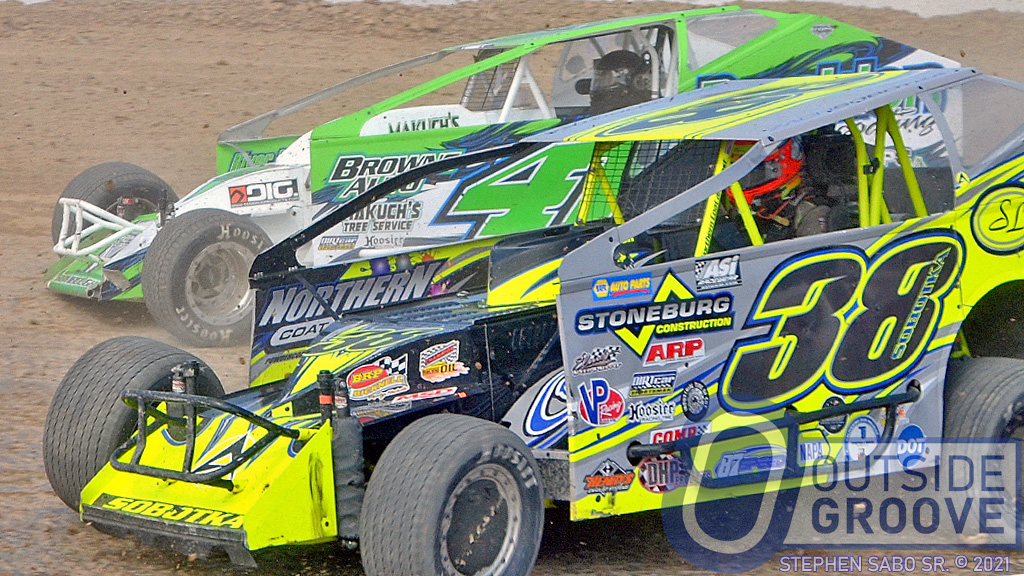 After starting 19th, Zach Sobotka (38) steadily made his way through the field during the Chevy Performance 75 portion of Super DIRT Week at Oswego Speedway in New York. He passed numerous cars, including Dalton Rombough (41), of Lowville, New York. Sobotka took the top spot on lap 55 of the DIRTcar sportsman modified feature.

“It took me 20 laps to figure out what would work to get to the front,” said Sobotka, 21, of Parish, New York. “I had nothing to lose starting that far back. I figured running the outside in turns one and two and the bottom in three and four was the fastest way around.”

The rough condition of the track surface concerned Sobotka.

“I wanted to get up there [to the front], but I didn’t want to break anything on my car,” Sobotka said. “I was able to pass two cars on every restart and passed a couple cars here and there before I got to the front.”

Sobotka’s team consists of him and his father, Mike, who prepares all aspects of the car except the shocks. Those are handled by Jason Varney of 87 Speed. Their one major sponsor, Stirling Lubricants, helps the team with tires and parts.

During the season, Sobotka frequents a pair of New York tracks — Brewerton Speedway and Land of Legends Raceway in Canandaigua. His win at Oswego came in his third try at the makeshift dirt oval.

“The setup for Brewerton Speedway is not even close to what you would need for Oswego Speedway,” said Sobotka. “We found that the Land of Legends setup is almost the same as Oswego’s. The third time entered into this race was a charm for us.”

Experience played a big role in Sobotka’s win. He won the Vermont 200 at Devil’s Bowl Speedway in West Haven, Vermont.

“Confidence is a major factor in winning a big race,” Sobotka said. “We ran well all year, and to win the Vermont 200 gave that confidence. My dad and I learned a lot since we started sportsman racing. We have an idea what to expect, and we can make sure our car is ready with the equipment we need.”

“We will keep racing in the sportsman division,” said Sobotka. “We just can’t afford a 358 or big-block modified.”