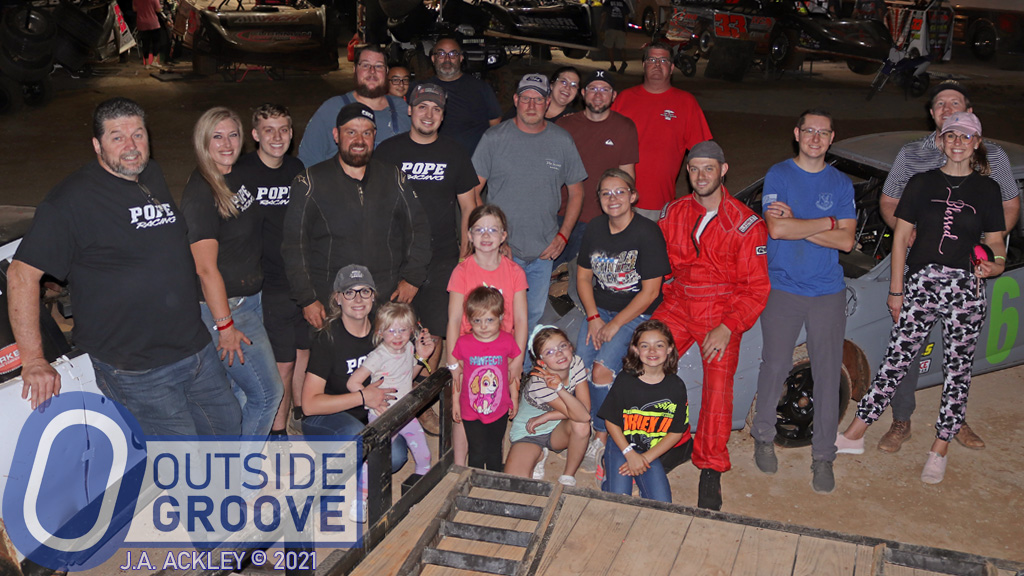 A swarm of people fills the pit of street stinger driver David Pope (driver pictured left) at Dixie Speedway in Woodstock, Georgia. While the motorsports industry preaches to enthusiasts to “bring a friend to the races,” Pope brings what seems like a small town. Pope offered his tips in getting folks to the track.

“Be friendly,” said Pope, 40, an auto mechanic from Dawsonville, Georgia. “Talk with people. Tell them how much you enjoy it. Let them experience it.”

Pope encourages those who want to see him race to do more than spectate. He pushes them to come in the pits with him and take part in the behind-the-scenes action.

“Sitting in the stands is fun,” Pope said. “But, when you feel like you’re involved in it, you can get more people to follow you and enjoy it.”

When one person gets converted to a fan, it can have an extensive impact on the sport. Case in point, Kevin Scott (the driver pictured on the right) went from one of Pope’s followers to racing his first race last Saturday at Dixie Speedway. At first, not everyone was enamored with the idea of Scott racing. Scott’s wife, Ashlei, expressed her concerns.

“The first night [Ashlei] went to a dirt-track race, that’s the night I flipped my car,” said Pope. “She started questioning it. I said, ‘You got to give it a chance.’ This Saturday she said, ‘I really enjoy this. This is fun.’”

When Scott debuted, he brought with him his own followers.

“[For] a lot of [Scott’s followers], that was their first experience [at the races],” said Pope. “This weekend was a new beginning for his family. They enjoyed it.”

Now, the sport has two drivers — David Pope and Kevin Scott — bringing groups of people to the races.

“Once they experience it, they will follow,” Pope said. “If they have a good experience the first time, they’re going to want to enjoy that adrenaline rush, because life can be boring if you just sit at home on a couch.”