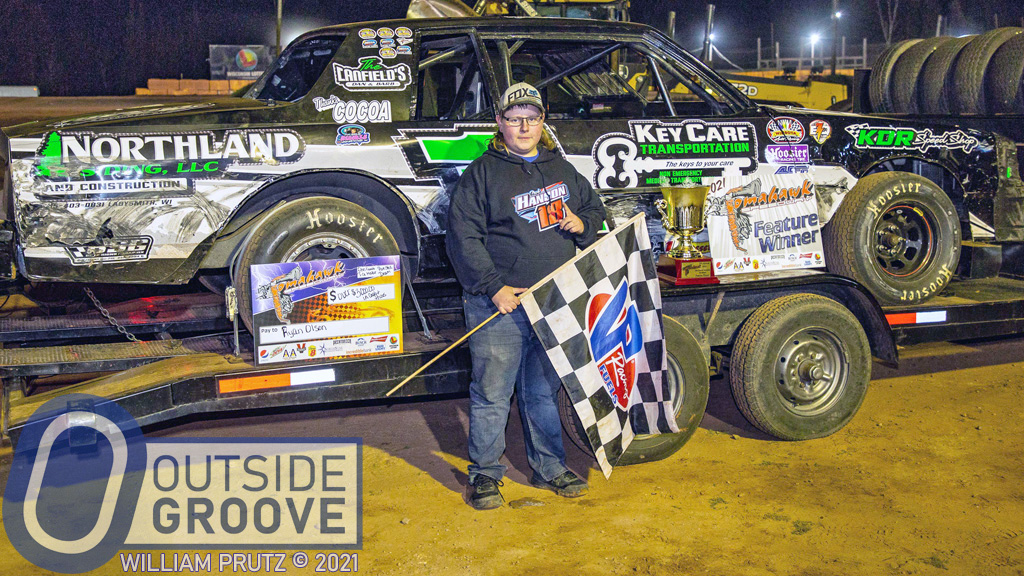 Ryan Olson received a surprise when he won the Ice Maker Pure Stock Dream at Tomahawk Speedway in Wisconsin. He had finished third, but the first two finishers didn’t pass tech. The victory netted him $3,650 in winnings.

“During the feature, I dropped down to fifth, and worked my way back up to third when I passed two cars on an early restart,” Olson, 16, of Ladysmith, Wisconsin, said. “There was a competition yellow just past halfway of the 30-lap feature. When we restarted, I knew I had to hold on to third, and I had to be knocking on the door of second-place car. Both the drivers ahead of me and behind me have years more experience than I do.”

Regardless of the number of races under the belts of his competitors, Olson came home with the trophy, and it wasn’t his first. He broke into victory lane a year ago at Eagle Valley Speedway in Jim Falls, Wisconsin. Olson then won two track championships this year at a pair of WISSOTA-sanctioned ovals in Wisconsin — Eagle Valley Speedway and Rice Lake Speedway.

He races a 1985 Chevrolet Caprice powered by a stock 305-cid engine. Olson keeps the car in the family garage along with the super stock raced by his father, Eric Olson. His team consists of high school friends Kaden Becker, Landon Hakes, and Ross Stout.

“My crew and I grew up together,” said Olson. “When we get out of school, we head to the garage and work on the car every night. We play by the rules. We want out car to be top-notch and legal.”

Ryan Olson ends the race season with the Ice Maker Pure Stock Dream win. He looks forward to campaigning his pure stock again next season. Until then, Olson focuses on his winter sport as a member of the Ladysmith High School ice fishing team.

“We’ll be out there fishing for bluegills, perch, and maybe walleyes and northern Pike,” Olson said. “We’re going to travel to different lakes across the state to fish this winter. Just like racing in the summer, it’s a Wisconsin thing to do in the winter.”