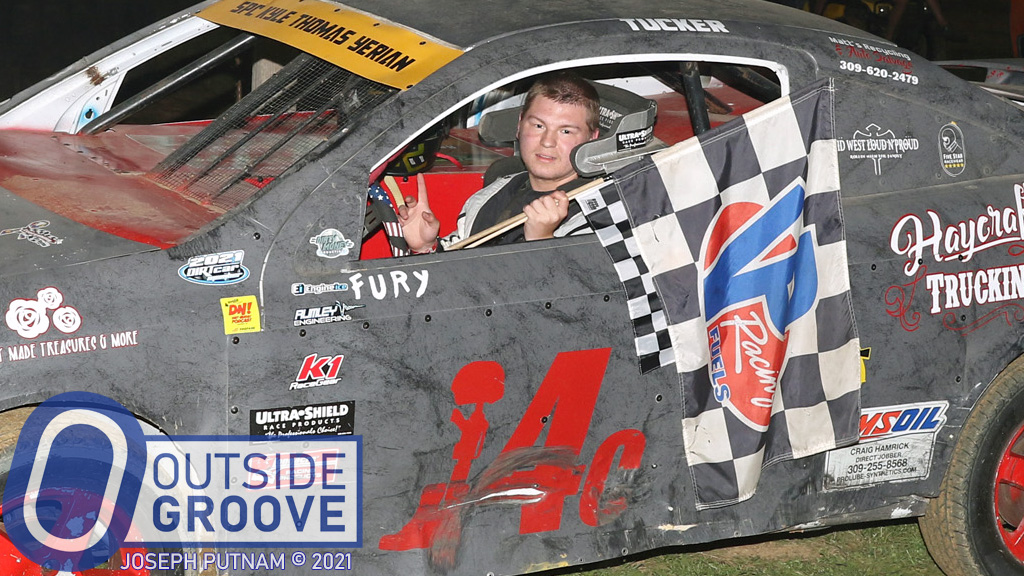 Tucker Clark celebrated an incredible feat last weekend. Yes, he won the 2021 DIRTcar hornet (aka sport compact) championship at Spoon River Speedway in Lewistown, Illinois. However, what was even more astonishing is that he gave a rather lengthy victory lane interview. Clark has autism and an auditory processing disorder (APD). Three years ago, before he started racing, he barely spoke. Racing had transformed Clark.

“Tucker went from struggling in school, struggling in life in general, to now he’s a fan favorite at the racetrack,” Tucker’s father, Jason, said. “I started racing with a boy trapped in a 15-year-old’s body. Now, I have an 18-year-old man.”

Parents of autistic children can find dealing with the disorder exhausting. The search for answers to help their children can also leave them feeling hopeless.

“The school district pretty much gave up on him,” said Jason. “They were just going through the motions with him. They said he was struggling. I was struggling as a dad. I didn’t know how to fix it and I couldn’t fix it.”

The Clarks looked for ways to help their son.

“[Tucker] tried playing football — it wasn’t his thing,” Jason said. “He loves watching it. He loves playing it on Xbox. But, doing it in real life….”

Racing came on the radar at the suggestion of one of Jason’s friends.

“We were at a garage party for a friend, and Tucker’s way of coping is walking in circles,” said Jason. “Tucker is outside the shop, cutting laps in the grass, and my buddy said, ‘Put him in a race car.’ [I said,] ‘I don’t know. He doesn’t do good with loud sounds. Doesn’t do good with lights. We thought it would overstimulate him.’ Another good friend of mind goes, ‘I have this old Neon behind the shop, come get it.’”

“Everything we knew leading up to that [was that] he was not going to enjoy it,” Jason said. “Everything you were told about autism [and] APD was going against [Tucker racing a car]. We said, ‘Let’s give it a shot. If it works, it works. If it doesn’t … we weren’t going to be out much.’”

Jason and Tucker Clark spent the winter of 2017 to 2018 preparing the car. A few things come to mind when Tucker recalls his first time behind the wheel of a race car.

“It was different,” said Tucker, 18, of Arenzville, Illinois. “First off, I didn’t even know how to drive a stick. The other part was getting the feel of the car.”

To put things in perspective, Tucker still doesn’t drive cars, except those he races.

“He hates driving on the street,” Jason said. “He doesn’t even have his driver’s license. But, you put the kid on the racetrack, it’s unreal.”

What occurs outside of the track seems to not necessarily apply inside of it.

“His special ed teacher came to the races this year,” said Jason. “She was blown away by what he does and how he acted. She told me he’s a completely different kid there than at school.”

Yet, after Tucker started racing, he began to transform away from the oval as well.

“I went to an IEP [aka individualized education program] meeting in his sophomore year, and they were like, ‘What changed him? He’s doing better. He’s reading better. He seems more focused,’” Jason said. “The only thing we’ve done is put him in a race car.”

Jason doesn’t quite understand why racing benefits Tucker, but he has a few theories.

“Him buckling into the car and being strapped in is part of his comfort zone,” said Jason. “One of the things at home, when he’s feeling stressed or overwhelmed, he wears a ton of blankets.”

The other aspect that racing did was force Tucker to communicate more.

“He wasn’t completely nonverbal, but he was close to 80% nonverbal,” Jason said of Tucker before he raced. “He [was] hard to understand when he did talk.”

“He realized that he does have a voice,” said Sam. “We want to hear what he has to say. If the car felt funny, he has to voice that. He now has the confidence to have that voice.”

Don’t Mistake Racing as a Cure

While Tucker Clark functions like most racers at the track, he still has issues with certain aspects of the sport. However, he can overcome most of them.

“Three weeks into racing, I watched him take his helmet off and he had one earbud [for his RaceCeiver] out,” Jason said. “I asked, ‘What are you doing?’

“He was like, ‘I have to have that earbud out so I can hear the cars, Dad.’

Other problems are tougher to deal with.

“This past weekend was supposed to be a Friday-Saturday show,” Jason said. “All day Friday, leading up to the race, you could tell Tucker was tense about something. [When the track] finally called the race [due to rain], you could see a wave of emotion release.

“He was like, ‘We’re not supposed to be at the racetrack on Friday night. We race on Saturday.’

“When he got up Saturday morning, he was a whole another kid.”

Many of those with autism crave routine, and any disruption in that schedule can cause issues.

Tucker Clark’s success has inspired those who deal with loved ones affected by autism. His crew chief, David Defrance, has an autistic son. Jason feels that since Defrance has that experience, he can “speak the language” that Tucker understands.

“It gives him hope,” Jason said of Defrance after working with Tucker.

“We have a friend, who allowed his son [Jonathan Wirebaugh] race because of Tucker,” said Jason. “They are going to continue it next year and hope it will help with him as well.”

Others approach the Clarks about their experiences with autism.

“Within the last month, we’ve heard from several people with an autistic child,” Jason said. “Watching Tucker race gives them hope for their kid. [They can think,] ‘Hey, we can go do things with our kid.’”

Many parents of autistic children don’t like sharing that aspect of their life. The Clarks debated on how to whether to let others know about Tucker’s autism.

“Part of me wants people to know, just in case they are in our situation,” said Sam. “Then, the other part [doesn’t want them to know, because we do not] want special treatment for it.”

At the races, Tucker Clark seems like any other racer out there.

“[When] he’s got his helmet and race suit on, he doesn’t appear any different,” Sam said. “That’s why he excels so well. People don’t know. That’s what he wants more than anything — just to be him, doing his thing, having fun.”

Tucker seems to feel like a fish in water at the track.

The day-to-day aspect of dealing with an autistic child can wear on parents, but the Clarks encourage those to hang in there.

“Don’t give up,” Jason said. “Find [your autistic child’s] passion and run with it. I’ve been told that Tucker would be in an assisted living home. I heard the worst-case scenarios about how’s he wasn’t going to amount to much.”

“Don’t give up on your kid,” said Sam. “It may not be racing, but there’s something out there. Don’t just push your kid in a corner.”

Because of the Clarks’ persistence — and daring to try something new — Tucker Clark put himself into the record books as a track champion. That was not lost on Tucker.

“It was an achievement for me,” Tucker said. “I was very excited. My emotions were really going during that speech.”