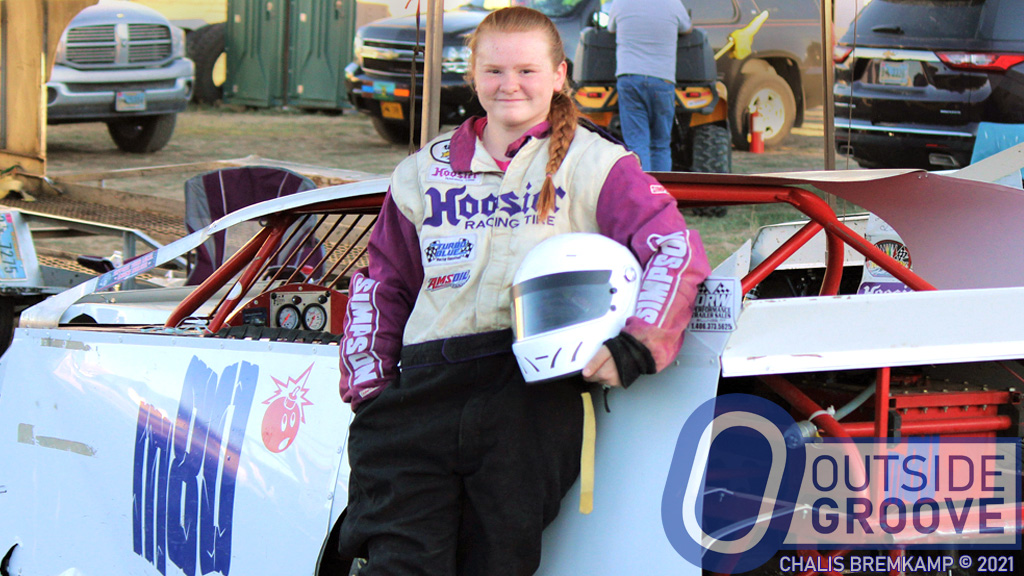 Mia Baxter rocketed to a top-five finish in her first-race ever last Friday. The next day, she wrecked her car. In one weekend she experienced both the highs and lows of the sport in the WISSOTA mod four class at Sheridan Speedway in Wyoming.

After the accident, Baxter cried on the infield, but not because she was hurt or the crash scared her.

“I was passing a guy for third and we made contact,” Baxter, 12, of Sheridan, Wyoming, said. “That shot my car into the wall. When I got to the infield I was crying. A lot of my parents’ money went down the drain.”

“Dad wrecked a lot of cars, and always said, ‘Rubbin’ is racin’,’” said Baxter. “Watching Dad, I saw how racing offers a chance to meet new people, make new friends, have a life experience, and have fun at the same time.”

Baxter said she was “a little banged up and bruised” after the wreck. Her main complaint was a sore foot from pressing on the brake pedal as she hit the wall. Other than that, she incurred no other injuries.

She sat in a Kirkey full-containment seat, with a RJS Racing Equipment five-point harness. Baxter wore a Zamp helmet paired with a Zamp Z-Tech head-and-neck restraint. She raced a 2012 Eagle chassis, with a 2016 update.

“She’s already thrashing away on the wrecked car, and is pulling the engine out today,” said Baxter’s father, E.J., on Monday. “She aspires to go after the national championship in her division next year.”

“After I wrecked, my father didn’t want to go out for his feature,” Baxter said. “He’s wrecked plenty of cars, so he knows what I was going through. I told him, ‘Don’t worry about me. Get out there and race.’”

After the pep talk from his daughter, E.J. Baxter started the feature 21st and finished 11th.