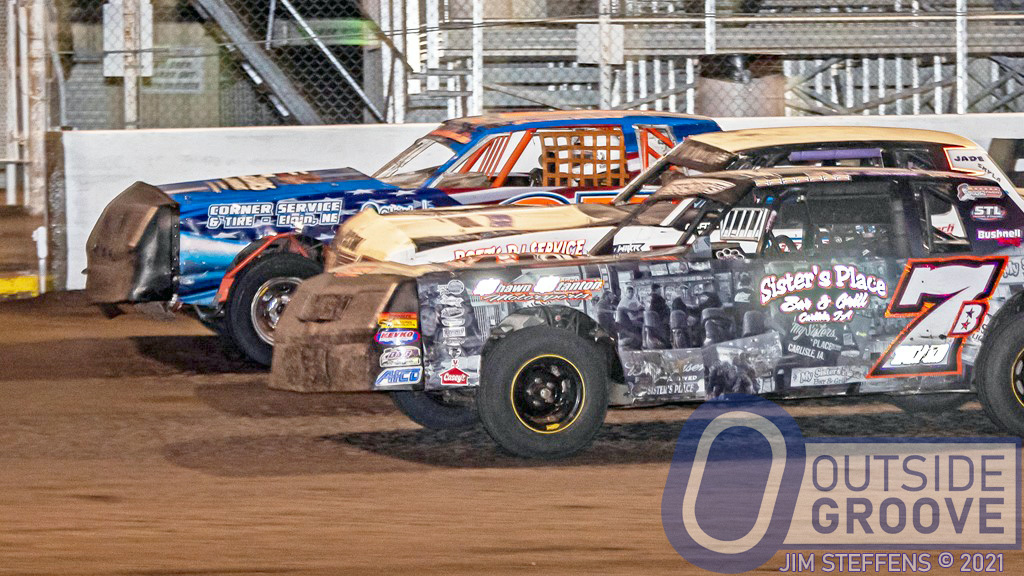 Jason Kohl (outside) eked out a win as the IMCA hobby stocks crossed the line three-wide. He beat out Jason Fusselman (middle) and Eric Stanton (inside) for the victory. The thriller occurred during the Tiny Lund Memorial weekend, on night No. 2, at Shelby County Speedway in Harlan, Iowa.

The three hobby stock drivers battled side-by-side, often three-wide, for several laps. After the race, the officials reviewed a variety of evidence to determine the winner.

“The official on the ground declared me as the winner,” Kohl, of Missouri Valley, Iowa, said. “The booth said that Eric [Stanton] was the winner. MyRacePass had me as the winner [and] a photo backed that up. After tech, they announced that I won by .032 of a second. That was amazing.”

Both Eric Stanton and Jason Fusselman congratulated Jason Kohl after officials declared him the victor.

“I’ve raced both of them for many years,” said Kohl. “We all agreed that the race was a crazy and a lot of fun. It was a very intense race. We went back and forth, nosing each other out on the last lap.”

The race remembers DeWayne Louis Lund, more commonly known as Tiny Lund. He earned the ironic nickname of “Tiny ” from his 6’5″, 270-lb. frame. The Harlan, Iowa, native made his mark in racing lore by winning the 1963 Daytona 500. He won five races total in what would become the NASCAR Cup Series. Sadly, Lund died at age 45 in a NASCAR Cup Series race at Talladega Superspeedway. This year marked the 29th running of the Tiny Lund Memorial weekend at Shelby County Speedway. Jason Kohl picked up $1,000 for the hard-fought win.

“The finish definitely was like [how] old-school stock car racing is described,” Kohl said. “I never saw Tiny Lund race, but I’m sure he would like to have been out there with us.”