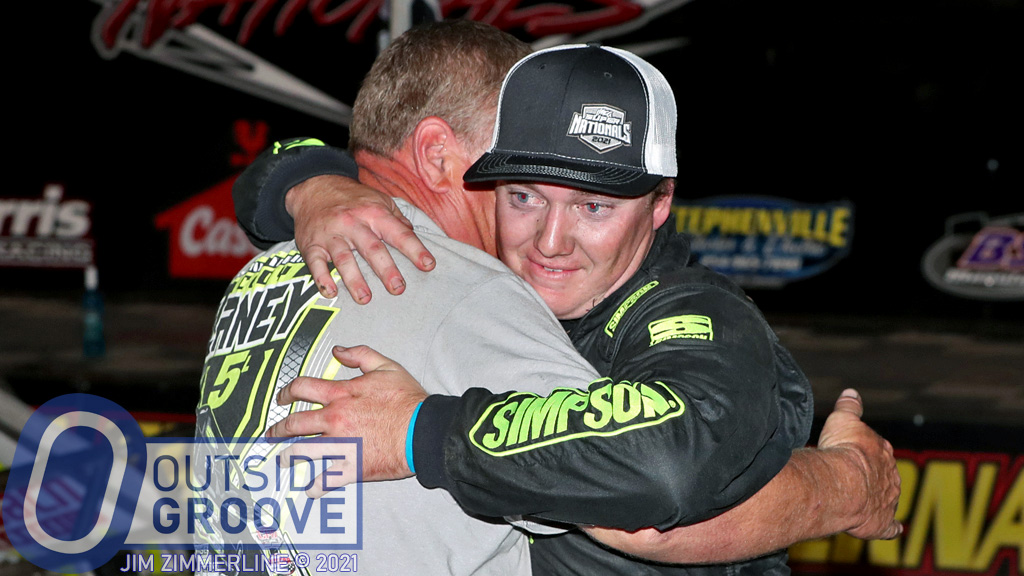 Cody Laney received a hug from his proud father, Chris, after his biggest win. He just scored the IMCA Speedway Motors Super Nationals victory at Boone Speedway, an event that drew a record-breaking 909 entries among seven classes. It was a long road for Laney to reach this point. Laney, 26, earned his first win in 1994 at the defunct Pearsonville Speedway in California. That’s right, 26 years ago.

“Cody won a feature before he was born,” said his father, Chris. “His mom, Carla, was sick after driving to the checkered flag that night. The next day we found out she was pregnant. It was Cody that drove her to that win.”

At age 14, Cody Laney, of Torrance, California, started racing at Perris Auto Speedway in California. He raced modifieds alongside his mother, who also raced at the 2021 Super Nationals. Three years ago, Cody finished third at IMCA’s penultimate event, the Super Nationals. Last year, he came home with runner-up.

This season, Laney embedded himself in Iowa, the heart of IMCA racing.

“I raced at Boone Speedway a couple of times this season and learned how the track changed through the night,” Cody said. “We had a lot of laps in the lead at Boone Speedway in 2020 to base our setup on. This year, we worked hard to make a difference in how the car performed.”

Saturday night at Boone Speedway, Chris Laney, who also serves as his son’s crew chief, watched from the turn one catwalk. He made eye contact with Cody lap after lap. His gestures encouraged his on-track moves.

Carla looked on from the back of a pickup truck in the infield.

“I’ve raced my whole life, and winning the Super Nationals is an unbelievable dream,” said Carla. “I have to be the proudest mom in the world.”

Friends and competitors lined up to congratulate the Laneys. They soaked in the moment that came so many years after Cody’s “first win.”

“We’re real proud and Cody is real thankful,” Chris said. “The hug says it all.”