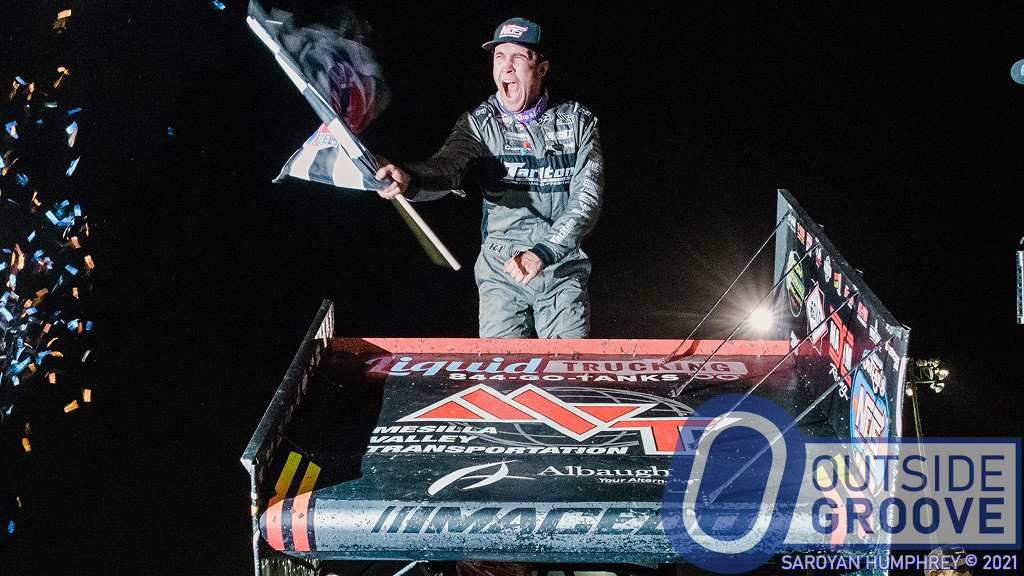 The race’s namesake, Tom Tarlton, gave Carson Macedo his first chance behind the wheel of a sprint car as a teenager. These days Tarlton sponsors Macedo’s racing endeavors.

“Tom Tarlton is the reason why I am a sprint car driver,” said Macedo. “I grew up in these stands watching him race.

Saroyan Humphrey interviewed Carson Macedo at Silver Dollar Speedway in Chico, California, a week prior to his home-track win.

Saroyan Humphrey (SH): It’s been over two years since the World of Outlaws have raced in California because of Covid. How has it been to be back in your home state on the tour?

Carson Macedo (CM): It was tough to not to be able to come out here because of the pandemic. I love coming out here to race. The racing is amazing. These are my home tracks and to be able to race in front of family and friends and see everyone is great. A lot of my family are part of the sport. It’s cool to be back in Chico [California, at Silver Dollar Speedway], and Hanford is the closest track to my hometown. All in all, I’m just excited and happy to be back.

SH: You won the inaugural Tom Tarlton Classic last year and won everything there was to win that night.

CM: It was special. Obviously, everything that Tom has done for me in my career has been incredible. I was a big part of the Tarlton 21 team for so long, and they helped me get my start in the Midwest with Keith Kunz and every other ride. They’ve been a part of everything that I’ve done. I’m very thankful to them for everything they’ve done for me. It was cool to win in both the sprint car and a midget. It was such a strong outing. To go back there again and win it again would be really cool.

SH: Does Silver Dollar Speedway hold a special place in your memory because you won your first World of Outlaws race there in 2014?

CM: Yeah, then I didn’t win another one until 2019, and that was [at Silver Dollar Speedway], too. That was with KLR [Kyle Larson Racing], in my rookie year on the Outlaws tour. It’s been a place that has given back to me, really. I’ve always seemed to put together good runs here. I feel like it’s a place that has suited me really well, over the years.

CM: Yeah, it was just special. There’s nothing like your first Outlaws win. It’s tough to win these races. It’s tough to get the confidence in yourself to win these races. So, to win one at such a young age was special. At the time, I was driving the Tarlton car and it was cool for them too. It was a confidence booster and a benchmark to say, “I can do this.” It helped me decide that I wanted to go out on the road someday. It gave me aspirations, for sure.

SH: At that point, you were starting to make a name for yourself in California.

CM: I was doing well. The following year, I won the King of the West [Sprint Car Series] championship. That was another thing that made me say, “Okay, I’d like to go to the next level.”

SH: Silver Dollar Speedway has had more first-time World of Outlaws winners than any other track in the series. Why do think that is? Of course, it’s been on the schedule since the beginning.

CM: It has unique characteristics. It’s a California track and there are a few guys that, because of the way our cars are fundamentally built for the rest of the tracks on the tour, [don’t] really fit this mold here. It’s a tiny bullring, with not much grip. When there is grip, you’re bouncing off something. It’s not your typical Outlaws track. That being said, I just feel like the locals race here a lot and they’re pretty good. They have a good handle on their race cars and the way they work the best on the conditions.

At Chico, you really have to get up on the wheel and drive out of control. So, the locals get used to racing that way. It gives ’em a bit of a leg up.

SH: Your first year with Jason Johnson Racing has been great. What is your perspective on the season so far?

CM: It’s been everything I thought it would be. I’m very thankful. I didn’t think we would have eight World of Outlaws wins. That’s a really good season. The other side of it is I’m proud of the comradery with my team and the professionalism with the sponsors involved. They’re a well-put-together team. Philip Dietz is an amazing crew chief. We’ve got Clyde Knipp, who has raced on the tour before as a driver and owner. There’s Nate Repetz, who does an incredible job with our tires. He’s a great addition to our team. We’ve got a great organization, a good group of people, great race cars, great engines. Philip and Jason Johnson Racing have continued to put together a great organization and I’m very thankful to be a part of it.

SH: As a driver, it seems like you’ve had a breakthrough year.

CM: It’s all just coming together. It’s my third year on the road. Things are starting to slow down for me. I’m starting to make better decisions and my team is good, and that helps on a lot of nights. We’re trying to click off consistent fast runs.

SH: You won at Skagit Speedway in Alger, Washington, on Labor Day. That’s a big one.

CM: Yeah, $25,000, that’s my biggest World of Outlaws payday so far. We want to win those big races and put our name on those marquee events. It felt good. It was good for my team. We hadn’t won a race in a little over a month, so, you start thinking, “Why aren’t we winning? What are we doing wrong?”

SH: What are some highlights for you from this year?

CM: We won at Eldora [Speedway in Rossburg, Ohio], which is somewhere I really wanted to win. In June, we won back-to-back Outlaw races at Knoxville [Raceway in Iowa]. It’s a place that’s tough to win — very technical. We won at Williams Grove [Speedway in Pennsylvania] and for a guy from California, that’s very tough to do.

Ultimately, the Outlaw tour is tough — you put your head down and keep grinding. We want to win the championship.

CM: Yep. We’ve had a few mishaps this year and a lot of them are on me. I wrecked at Cotton Bowl [Speedway in Paige, Texas] and had some other wrecks that have caused me to fall back in points. But, our consistency and speed have been there — and that’s the main thing. I need to clean up my mishaps and hopefully we’ll be right there.