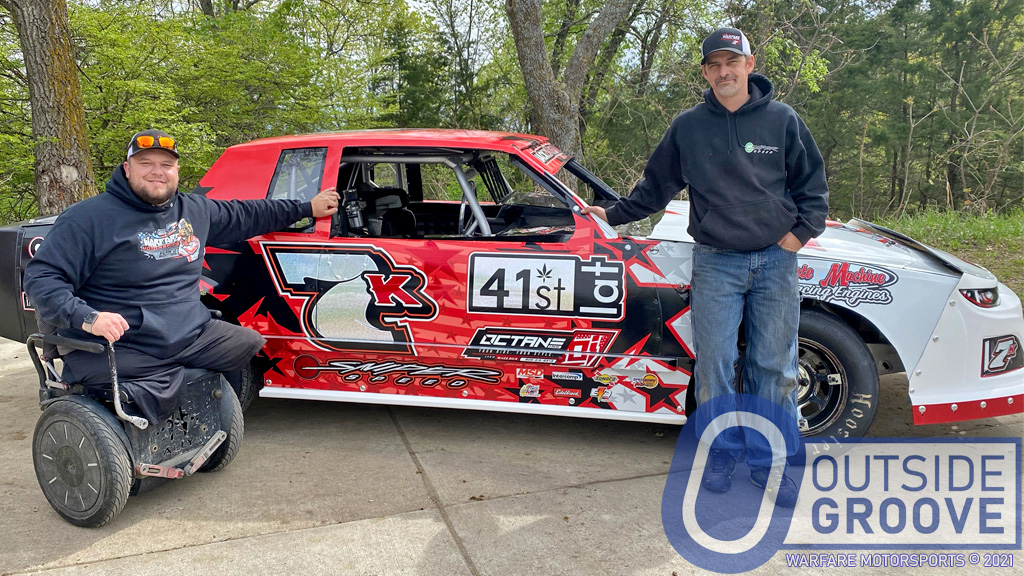 Racing helped Jack Zimmerman (left) cope with the loss of both legs after stepping on an IED while serving in Afghanistan. As the result, he helped found Warfare Motorsports, which works with IMCA stock car driver Chad Schroeder (right), of Belle Plaine, Minnesota.

“I never wanted to be that guy — the one profusely thanked for his service because he is in a wheelchair,” Zimmerman, of Mankato, Minnesota, said. “Sometimes, the veterans’ wounds that go unseen are worse than the ones you can see.”

Jack Zimmerman joined the U.S. Army in 2009. They assigned him to the 101st Airborne Division as an infantryman. Zimmerman was fighting in the Zari district, where the Taliban had originated. He was on foot patrol looking for a Taliban cache.

“We found ourselves in the middle of a gunfight,” said Zimmerman. “We fought it out until helicopters came in with missiles. Then, we headed back to base for water and ammo.”

After replenishing, Zimmerman went back out to the battleground, on the left flank of his team.

“I felt myself flipping through the air,” Zimmerman said. “The next thing I knew, both my legs were missing. I was lucky and fortunate that my fellow soldiers immediately worked on me to save my life. They threw me on a copter to Kandahar.”

After six weeks in which he endured 20 surgeries back in the U.S., they transferred Zimmerman home to Minnesota. He settled back into the community with his wife, Megan, where they raised sons William and Benjamin.

The boys wanted to see their uncle race in the IMCA stock car division at Arlington Raceway in Minnesota. Then, they desired to get involved in go-kart racing. Three years ago, Zimmerman bought a kart for his sons.

“We were at the kart track with a kart I bought for William, when another father, Chad Schroeder, offered his help,” said Zimmerman. “I started working with him, and enjoyed it so much I began working on his stock car. I finally found a place and a community that accepted me. I was part of a team again. I appreciated it so much and became so happy.”

Zimmerman will never forget opening night at Arlington Raceway in 2019.

“My wife and my mom were acting weird when we were at the track,” Zimmerman said. “I saw a track worker put a wheelchair ramp from the stands to the track. Then, the announcer called me out as everyone stood at attention for the national anthem.”

To Zimmerman’s surprise, a Humvee pulled onto the track with a stock car following it.

“I couldn’t figure out why a Humvee would be at the racetrack,” said Zimmeman. “Then I saw that Chad’s car was wrapped to honor military veterans and my service. Last year, Chad and I formed Warfare Motorsports. Our team has three pillars — promote racing, teach patriotism, and raise awareness for a different veterans program each season.”

Jack Zimmerman stresses the importance of community connections for veterans.

“Ten years ago, we got back from Afghanistan, and today there are soldiers who still need the courage to say they need help,” Zimmerman said. “Veterans are reluctant to talk to a therapist, but they will talk to other veterans and those now in the service. That is how this program and these races will help them.”