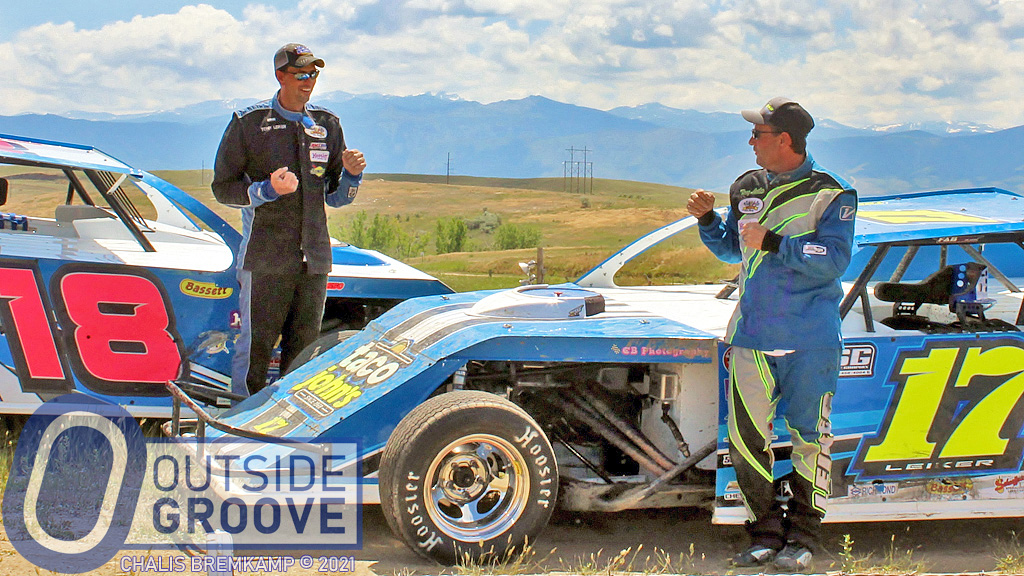 If you’re racing WISSOTA Midwest modifieds, you’ll likely have to contend with the Leiker brothers —Tony (left) and Troy (right). Tony has won his last nine features. He brought an end to his brother Troy’s streak earlier this season, which stopped at eight consecutive wins.

“He’s on a heater right now, so I’ve been jawing him non-stop,” Troy said of his brother Tony. “I tell him every race that tonight is the night I end his streak.”

The Leiker Brothers, of Gillette, Wyoming, actual number at three — each born one year, one month, one day apart. Tony is the oldest at age 46. Troy is the youngest at 44 years old. Their middle brother, Nick, used to race with them, but recently stepped back to watch his siblings duke it out.

Tony has earned a total of 15 track championships. Troy’s most proud of finishing second in the WISSOTA national modified points, in 2007.

“Tony is my idol,” Troy said. “Not only is he my brother, but he is my best friend. We talk three times a day and bounce ideas off of one another.”

Tony builds chassis, which he branded the Fab 18 Chassis after his car number.

Tony used to build and maintain conveyor systems for coal mines. Now he plies his fabrication craft with race cars. Troy works in the oil fields, but plays a vital role in his brother’s operation.

“Us racing together makes the Fab 18 cars better,” Troy said. “We help everyone else get going faster.”

Having two different perspectives helps the chassis business, according to Tony.

“We feed off each other and it makes us better,” said Tony. “Troy’s feel of a race car is different than mine. It helps to have more than one voice.”

Other racers describe Tony as humble. He wants to see everyone who drives his cars be successful. However, his stiffest competition comes from his brother, Troy. The two Leiker brothers plan to battle this weekend at a pair of dirt ovals — Black Hills Speedway in Rapid City, South Dakota, and Sheridan Speedway in Wyoming.

“My brother talks a lot of shit to everyone — not just me,” Tony said. “It’s all in good fun. He wants competition. He wants to win. I also want to win. That’s what racing is all about.”