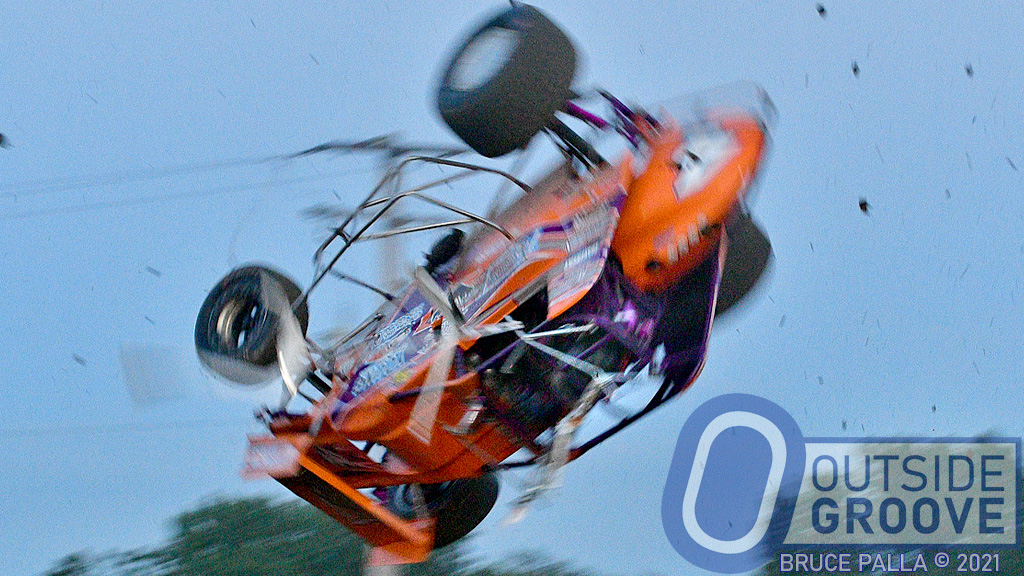 Justin Davis incurred serious injuries when his lightning sprint flipped on July 17 at Wilmot Raceway in Wisconsin. A worn belt created a dangerous scenario. The wreck started like many others.

“I was on the high side, and another driver was passing a slower car on the inside,” Davis, 29, of Spencer, Indiana, said. “He stomped the throttle, and his car shifted into the lane I was running. It was all over from there.”

Hoosier Speed, of Bloomington, Indiana, modified a midget chassis from Triple X Race Co. to create the lightning sprint raced by Davis. Hoosier Speed’s Andy Bradley said they did not install the car’s seat or harness. Bradley inspected the car after the accident.

After the crash ended, Davis knew he was significantly hurt — the first time ever during his racing career.

“I could not raise my arms past my chest,” said Davis. “I was in severe pain. The [accident] ripped the whole sleeve of my [Hinchman] fire suit. I insisted my dad take me to the hospital, which was right near the track, instead of the ambulance. At the hospital they said nothing can be done for a sternum break. The doctors [at the hospital] said I was lucky my sternum did not puncture my heart. I would have been dead right there.”

Davis is currently recuperating from his injuries at home. In addition to suffering a broken sternum, he also incurred two bruised lungs, and pulled back muscles. Davis must use a breathing machine at two-hour intervals to prevent fluid from building in his lungs and causing pneumonia.

“My fiancée, Lindsey, is helping me a ton,” Davis said. “I can’t take a shower on my own and I have to walk around holding a pillow.”

Davis said it will take 10 weeks for his injuries to heal. As the result, he will lose his points lead in the Midwest Mini Sprint Association (MMSA) after winning four races on the circuit this year. He ventured to Wilmot Raceway after the MMSA event on the same day rained out. Davis wanted to test a new shock package from Super Shox.

“The doctors told me not to get into a race car under any circumstance until I am fully recovered,” said Davis. “My sternum could splinter and puncture my heart.”

His injuries sidelined him from more than racing — he cannot earn a living, either. Justin Davis works three jobs — as a carpenter, a maintenance man, and food delivery.

“I don’t get paid, unless I work,” Davis said. “I need to work to pay my bills. I never thought I could get this badly hurt.”