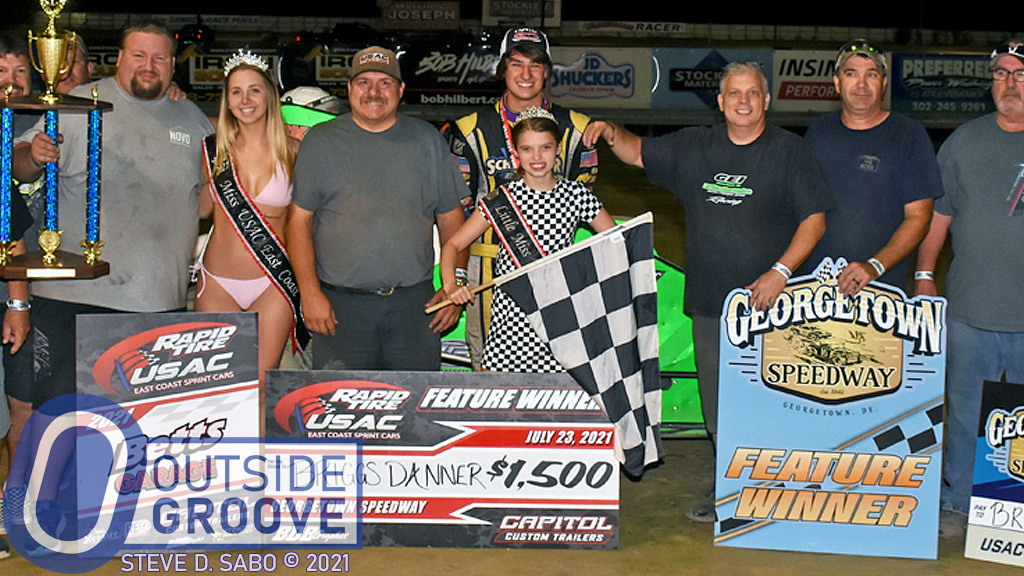 Crew Chief Curt Michael (pictured to your right of driver) faced the biggest challenge of his career when his car owner, Bill Gallagher, 67, passed away on July 9. His death came midway through a successful new season with rookie driver Briggs Danner, of Allentown, Pennsylvania. However, the team rebounded with a win last Friday during the USAC East Coast Sprint Cars event at Georgetown Speedway in Delaware. They left an empty space in victory lane for where Gallagher would have stood to celebrate.

“Bill was active right up to the end,” said Michael, of Ocean View, Delaware. “I’d been with Bill 13 years as a driver. Covid-19 got him. It took some time just to get over the shock.”

Michael won 10 URC championships as a driver, many of which he earned while driving Gallagher’s cars. Bill Gallagher, of King of Prussia, Pennsylvania, owned the paving company GEI Enterprises Inc. and top soil and mulch producer Valley Forge, Inc. that sponsored his sprint cars.

“This year, I decided to step back and bring a young guy up,” Michael said. “I’m 49 years old and haven’t raced this season. Briggs is 19, never drove a sprint car until this year, and he’s won six out of 12 races in the USAC East Coast Sprint Cars.”

Michael said Gallagher’s loss was tough on everyone in the tight-knit sprint car division.

“Bill and I were best of friends,” said Michael. “His death was a shock to Briggs’ system. The kid just got his break. Everything was going great. Then, the car owner he just got to know passed away.”

“Bill built such a good team,” Michael said. “It is a testament to him that the team can keep on rolling. We came out winning. We went from shock to elation in a couple of weeks. It was as good as it could be without Bill being there in victory lane with us.”